Kick-Starting Success for the Next Generation 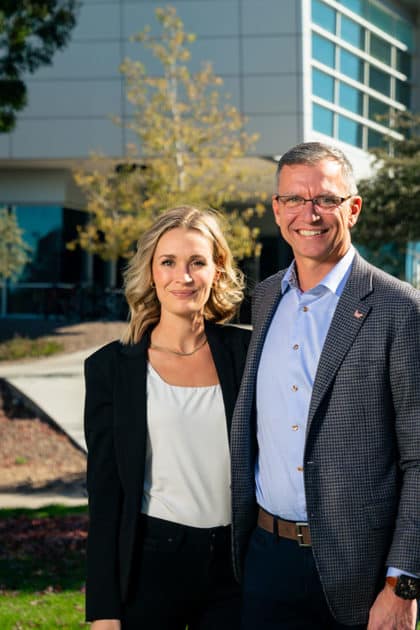 But he says he had no money and knew his family couldn’t pay for it. So he joined the U.S. Air Force and later achieved his goal of becoming an Embry-Riddle graduate, earning a bachelor’s degree in technical management through Embry-Riddle’s Worldwide Campus.

Education made a big impact on his life, and Ryan wants to ensure other students, like himself, can pursue their dreams, regardless of their finances. That’s why he and his wife Sierra recently created both term and endowed scholarships for Embry-Riddle Prescott Campus students.

“It gives us an opportunity to create opportunities for others,” he says.

The Ryan and Sierra Hartman Endowed Scholarship and Term Scholarship will be awarded to full-time undergraduate students at Embry-Riddle’s Prescott campus with financial need.

“Embry-Riddle’s Prescott Campus has a lot of meaning to me and draws some unique students,” says Ryan.

“Both of us are here making this gift to Embry-Riddle students because we were helped at some point along the way,” she says. “We haven’t forgotten that and never will."

Ryan, who is currently leading World View Enterprises’ space tourism venture to launch a stratospheric balloon that will carry passengers more than 100,000 feet above the Earth, credits his Embry-Riddle education with helping him become a leader in the aerospace industry.

“I certainly wouldn’t be where I am without the opportunities I had and without having the experience I had at Embry-Riddle,” Ryan says.

Now he is looking to helping the next generation of industry trailblazers.

“When we look at giving and the kind of things we want to support, it’s those things that create success for others,” Ryan says. “It’s all about kick-starting something that allows someone to be impactful in the future.”
This website uses cookies and similar tools and technologies to understand visitors’ experiences. By continuing to use this website, you consent to Embry-Riddle Aeronautical University’s use of cookies and similar technologies, in accordance with the Embry-Riddle Privacy Statement.