After nearly four years of perseverance, the Eagle Flight Research Center (EFRC) team at Embry-Riddle is celebrating a milestone in its electric propulsion research: its Diamond HK-36 completed a successful taxi test exclusively on electrical power at the Daytona Beach International Airport.

Dubbed the eSpirit of St. Louis — in honor of Charles Lindbergh’s notion of balance between aviation and the environment — the aircraft serves as a testbed for students to gain experience on the interdisciplinary aspects of mixing electrical engineering skills with aerospace engineering. As faculty and student researchers develop a unique fully electric propulsion system for the eSpirit, they bring aviation a step closer to cleaner and quieter flight — objectives that could revolutionize commercial aviation.

“Successful tests such as our most recent taxi are large steppingstones toward goals that are shaping the future of air transportation with hybrid and electric platforms,” said Joseph Thiemer, an Aerospace Engineering student completing his bachelor’s degree.

Gaining experience with this equipment and in this field is very beneficial at the undergraduate level, to be able to take that experience to the industry and apply it towards something that will eventually be used worldwide.

Dr. Richard “Pat” Anderson, professor in the Department of Aerospace Engineering and director of the EFRC, piloted the experimental aircraft with Thiemer as co-pilot. During the taxi session, Thiemer programmed and monitored parameters in the motor inverter/speed controller and monitored the battery management system.

In total, the eSpirit taxied about a quarter mile during its initial test.

“I am ecstatic that we achieved this taxi milestone and look forward to our next milestone – flight – an arduous task, but not an impossible one,” said aerospace engineering master’s student Sanay Satam. “We know the challenges that stand before us and are motivated to overcome them. It is all about the high fives at the end of the day, knowing that we were able to achieve our goals, thus fueling, or should I say, electrifying our ambition to succeed in the flight phase.”

The HK-36, donated by Lockheed Martin Skunk Works, first operated on electric propulsion in a ground test in the EFRC hangar in 2017.

The College of Engineering’s EFRC has had its eye on “green aviation” and electric propulsion for more than a decade, said Dr. Maj Mirmirani, college dean. “Our research on hybrid electric and electric powered vehicles has brought this technology ever closer to being available for commercial use.” 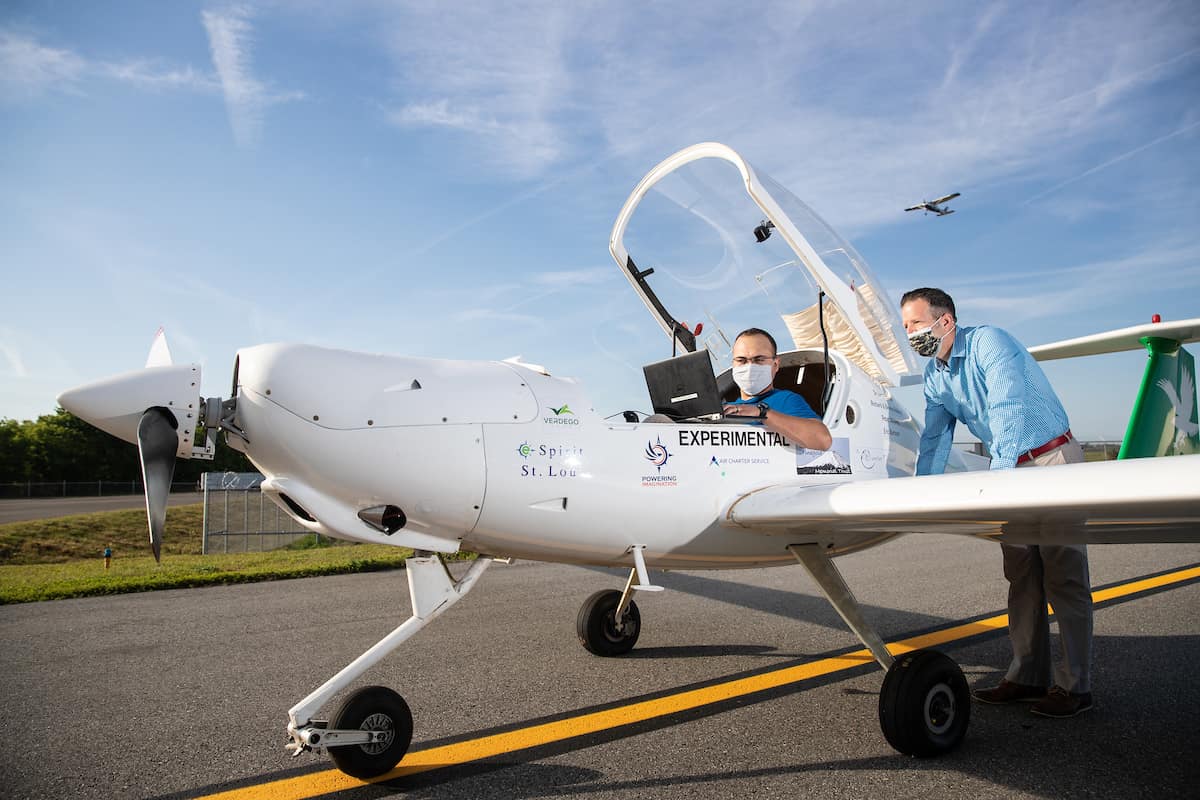 The Eagle Flight Research Center at Embry-Riddle recently reached a milestone by taxiing a Diamond HK-36 down a runway solely on electric power. (Photo: Embry-Riddle)

While the technology employed for the eSpirit’s electric motor and inverter is currently used in the automotive industry, the EFRC designed its own battery packs for the aircraft. Unlike other electric aircraft that have dedicated spaces for battery packs, the EFRC design allows the packs to conform to irregular and small spaces.

“Battery weight is the critical factor when it comes to designing electric aircraft battery packs. To achieve this, the batteries operate near maximum performance and, as a result, generate heat. Care must be taken to design battery packs that can be cooled,” said Dr. Kyle Collins, research assistant professor at the EFRC.

The packs used for the taxi test are a first generation design. New equipment and research performed over the past year enabled the EFRC to bond the battery cells together, which has led to a more advanced, liquid-cooled pack design.

“As advancements are made with battery energy density, the application of using electric motors for aircraft propulsion becomes more practical. Carbon emissions, noise pollution, and alternate forms of urban mobility will all benefit,” Thiemer said. “Gaining experience with this equipment and in this field is very beneficial at the undergraduate level, to be able to take that experience to the industry and apply it towards something that will eventually be used worldwide.”

The new second-generation battery pack technology will eventually power the eSpirit’s future flight, which will rely solely on electric propulsion.

Read more about the eSpirit project and how Embry-Riddle is electrifying the third revolution in aircraft propulsion.