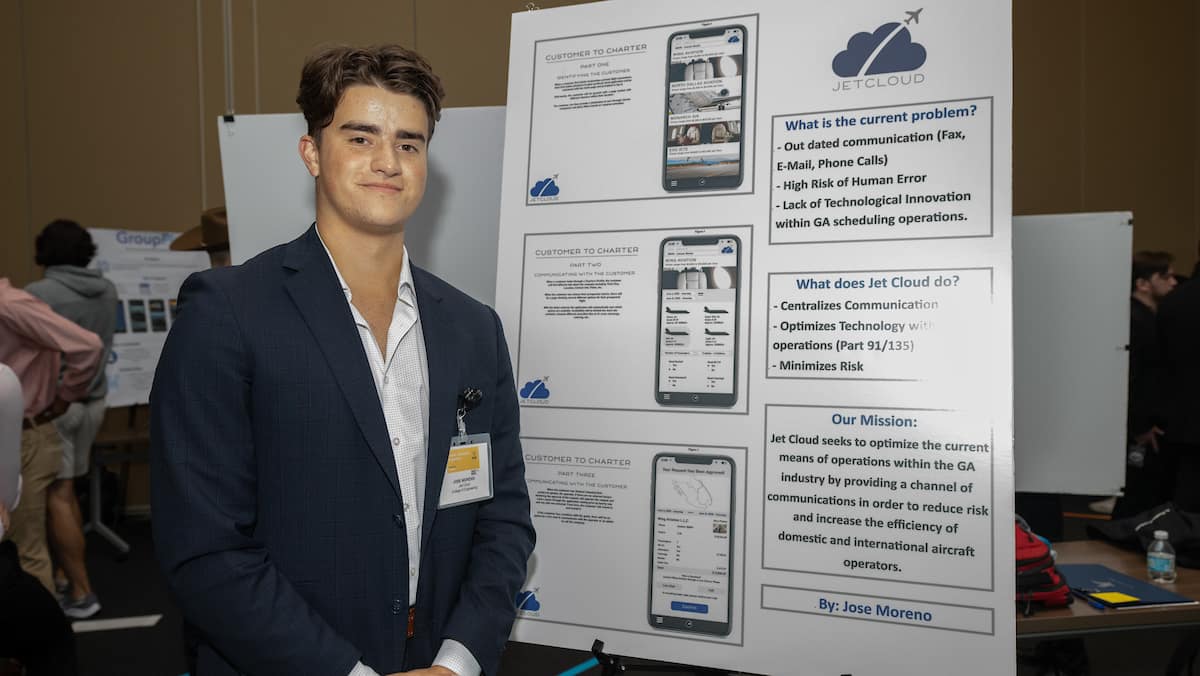 The trio from Zaragoza, in northeast Spain, won the Aviation, Aerospace, Engineering category at the Thursday, Nov. 18, event with their company, Improving Aviation, a firm that aims to enhance aviation sustainability.

All former and current Aerospace Engineering students, members of the trio plan to capture kinetic energy by placing turbines behind airport runways to capture the energy from takeoff then provide it back the airport free of charge.

“We need to develop a prototype and test it as soon as we can so that we have something to show investors,” said Ferrando, who earned his bachelor’s degree in 2018 and his master’s in 2020. Frej graduated in 2013, and Alonso is a current senior. “We need to build a (minimum viable product) and see if the results are what we expected, and from there, scale up.”

Company cofounders Ferrando and Frej first met in 2015 through mutual friends. They began working on this initiative in February of this year.

Stroup said she was “shocked” to see her team’s name on the big screen displaying the winners.

“I saw them start to type the name of the winner, and saw M and thought it was (another company),” she said, with a laugh.

The three current Embry-Riddle students had another entry in the expo, as well, and expected that one to have more success. Instead, it was MiCap Technology that earned them one of the $1,000 checks awarded to winners.

Stroup said she initially had the idea of applying the technology to cell phone chargers.

“The tip of the charger is always breaking,” she said, adding that it was Embry-Riddle’s focus on aviation that inspired the use of alternative materials.

The team developed the concept of using soluble polyimide microcapsules to repair minor physical damages and abrasions to wires automatically, eliminating the need for a mechanic’s involvement.

“It’s such a new idea,” Patterson said. “There’s so much potential. Not just in the aviation sector. Talking to the judges, they removed the horse blinders. There are limitless possibilities.”

Adam Lachguar’s aquaponics company Project Gera, aiming to produce sustainable farming that can produce cheap, organic and environmentally friendly produce and fish, won the Global Products and Services flight. Project Gera hopes to create an enclosed farm that requires little input and can be fully automated to help create organic food at a fraction of the current cost.

Jose Moreno’s Jet Cloud, with its charter jet phone app, earned the People’s Choice Award. The app will let customers not only choose dates of their flights, like most typical travel apps, but it also will let users choose from different amenities, such as Wi-Fi, crew, concierge and catering.

The event returned to its in-person format after going virtual during the pandemic last year. More competitors than in any previous year pitched their projects to judges while the university community voted for their favorite, ranging from a survival-supply company to a bed manufacturer to an outdoor-signal-boosting company.

“What I love about this event,” said Dr. Shanan Gibson, dean of the David B. O’Maley College of Business, “is that it represents the whole campus.”

New to the competition this year was the involvement of a group using the NASA Technology Transfer Program (T2U), through the Space Technology Repurposed. The participants of that Flight are from the Entrepreneurship course that incorporate the T2U program.

“Dr. (Ramy) Rahimi has given them good direction,” said Delvin Van Norman, the partnership manager for the technology transfer office at NASA. “They showed a lot of promise.”