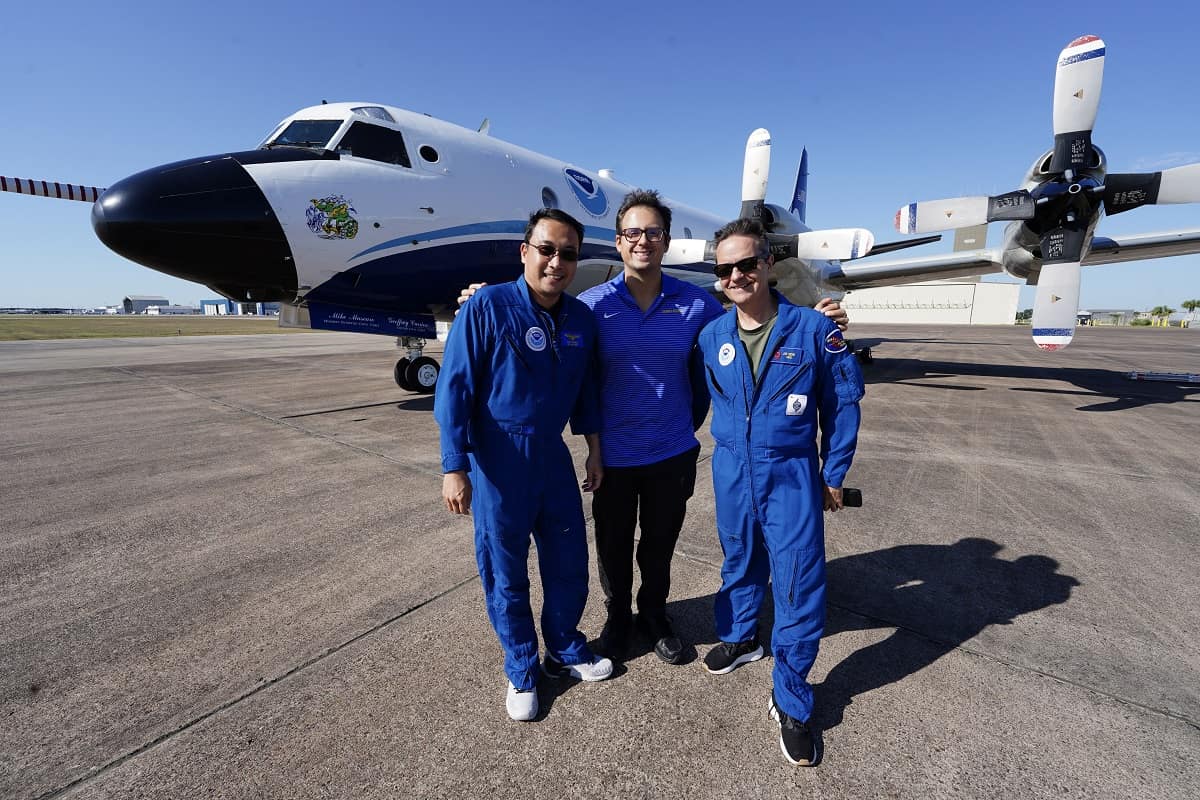 Wadler’s mission aboard NOAA’s Lockheed WP-3D Orion Hurricane Hunter aircraft was to drop a specially equipped, long-endurance drone — known to scientists as a small uncrewed aerial system, or sUAS — directly into the storm. The drone was designed to capture data close to the ocean’s surface, where crewed planes can’t fly.

“The idea is to improve forecasting of hurricane intensity changes,” said assistant professor of Meteorology Josh Wadler. “Ian was an especially interesting example of intensity changes: It started as Tropical Depression Nine and then rapidly intensified.”

Wadler and colleagues were conducting the first-ever deployment of a second-generation hurricane-hunting drone called the Altius-600.

Currently, the only data near the ocean’s surface available for hurricane forecasts comes from dropsondes — small weather-reconnaissance devices that fall from Hurricane Hunter planes. However, dropsondes only capture data in the single vertical column where they were dropped.

The Altius-600 will gather information over a much larger area, Wadler explained. With a wingspan of eight feet, the 25-pound Altius-600 has a lifespan of 3.5 hours and can travel 200 miles from the Hurricane Hunter while continuously streaming data. By comparison, a previous-generation drone, the Coyote, could run for about an hour. 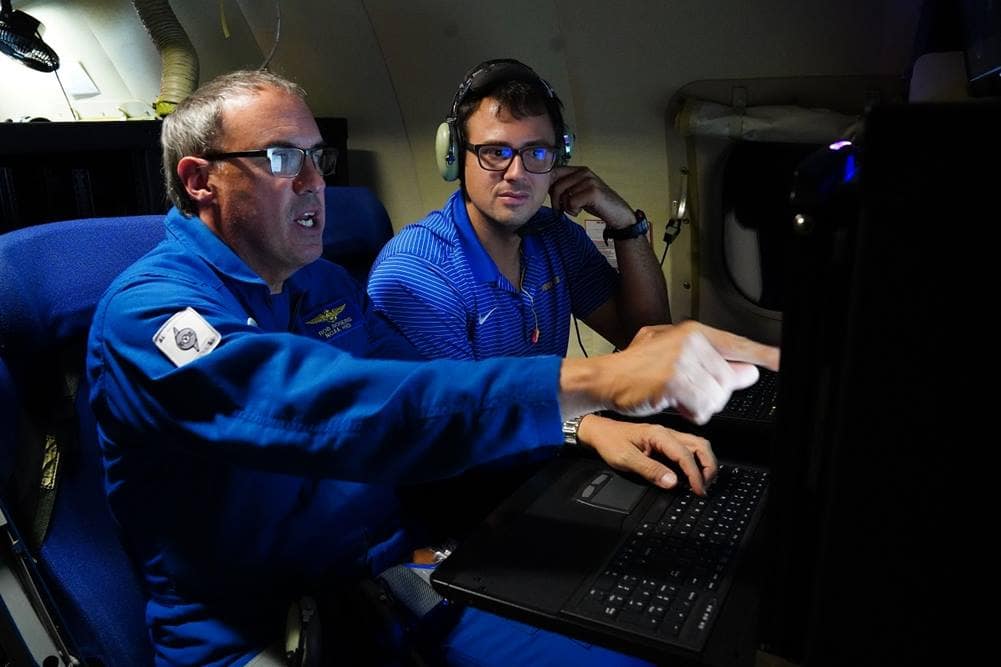 Josh Wadler, of Embry-Riddle (right), and Robert Rogers, of NOAA, discuss where to send the Altius-600 within Hurricane Ian’s eyewall. (Photo: Jake Barlow)

In news articles, Cione has explained that researchers need more data at the ocean’s surface because humans do not live 20,000 feet above sea level. “When storms make landfall,” he has said, “we want to know what the winds are doing right at the boundary layer.”

It’s tough to capture data near the sea’s surface; planes can’t fly too close to the water because of strong winds as well as salty waves, which can spark engine fires. Yet, the boundary layer near the surface is where changes in turbulence drive changes in the storm’s intensity — the exact information that would improve weather forecasting.

In 2018, Wadler joined Cione as they flew over the Gulf of Mexico straight into Hurricane Michael — the first Category 5 landfall since Hurricane Andrew in 1992. The Coyote measured wind speeds of 184 miles per hour at 2,100 feet altitude, while Hurricane Michael was a Category 3 storm undergoing rapid intensification.

This June, the researchers tested the Altius-600.

An operator can fly the drone remotely, but it also uses a pre-programmed flight plan. As the Hurricane Hunter flies “below ice and above the salt spray,” at around 8,000 to 10,000 feet above sea level, the drone sends data back to the aircraft as well as to a ground-based station. The drone gathers data on pressure, temperature, humidity, wind speed, wind direction and sea-surface temperature. Next year, it will even measure wave heights using a laser, Wadler noted. Once the drone’s battery dies, the aircraft glides into the ocean.

As he was preparing to board the Hurricane Hunter on Sept. 28, Wadler told a “Daytona Beach News-Journal” reporter that he was excited but not afraid. “Certainly, it takes perspective,” he told journalist Mark Harper. “We have a lot of respect for the (Hurricane Hunter) crew. They train year-round for safety, and the flight plans are designed to maximize safety and protect human life. I would say it’s safer than being on the ground.”

After the mission, Wadler reported that the Altius-600 worked well. “We sampled maximum winds of 215 miles per hour at 2,200 feet altitude only a couple of hours before the storm made landfall,” he said. “It really demonstrated the power of the [drone].”

The crew didn’t feel comfortable with a second eyewall pass after experiencing extreme turbulence. “The drone sampled a region too dangerous for crewed aircraft to be in,” Wadler said. “It did exactly what it was designed to do,” Wadler said.

Wadler, whose grandparents owned a condo in Florida’s Broward County, set his career path at an early age, long before earning his bachelor’s degree at the University of Oklahoma (Norman Campus) and his Ph.D. at Miami University. “I said when I was 10 years old that I was going to be a hurricane scientist,” he said. “Here I am.”