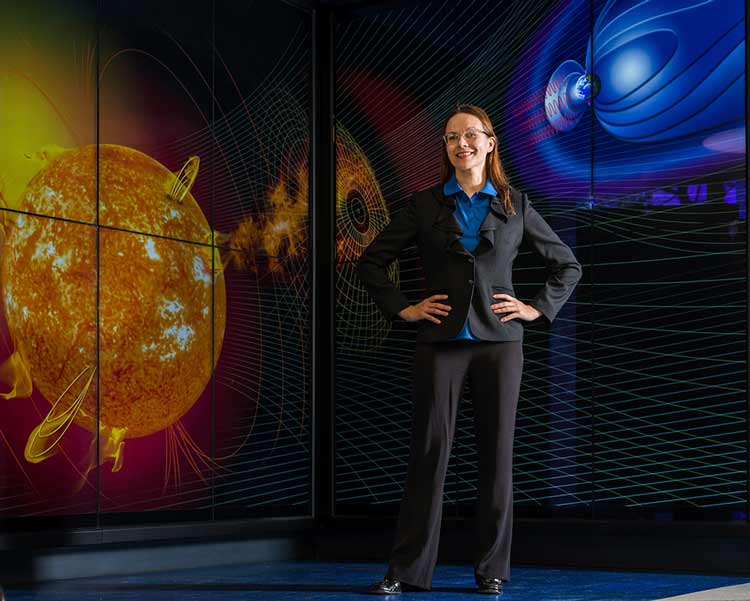 Dr. Katariina Nykyri: "The past 10 years have been an exciting time for heliophysicists." Photo: Daryl LaBello/Embry-Riddle

On Aug. 12 this year, NASA’s Parker Solar Probe blasted into space atop a Delta 4-Heavy rocket as part of the first-ever scientific mission to “touch” and better understand the sun.

Watching the launch from Cape Canaveral was mission namesake Dr. Eugene Parker, age 91. A University of Chicago emeritus professor, Parker’s bold 1958 prediction of solar wind – the plasma and charged particles that continuously stream from the sun, rocketing into space at speeds of nearly 3 million kilometers per hour – forever changed our view of the star that makes life on Earth possible.

Dr. Nicola Fox, project scientist for NASA’s Parker Solar Probe, had invited Nykyri’s Embry-Riddle research team to witness the launch. “It was an amazing experience to see the mission, 60 years after the original idea for it, as it finally launched,” Nykyri said. “I look forward to analyzing the first data captured so close to the sun, to check if some of our recent theoretical predictions are correct.”

Although Nykyri didn’t have a chance to meet Dr. Parker at the launch, she shared an interview of him with her undergraduate Space Physics class. “I was teaching them Parker’s derivation of solar-wind expansion using magnetohydrodynamic equations,” she explained.

The National Academies of Sciences, Engineering and Medicine – established in 1863 to provide nonpartisan, objective guidance to decision makers – invited Nykyri to help define the nation’s agenda related to heliophysics, the study of our sun and its impacts on the solar system, a field largely triggered by Parker’s game-changing discovery.

Nykyri, a professor of physics and associate dean of Research and Graduate Education in the College of Arts and Sciences on Embry-Riddle’s Daytona Beach Campus, will serve on a Congressionally mandated committee assigned to assess U.S. heliophysics research priorities and progress.

Comprised of 18 of the nation’s leading space science experts, the committee will look at how NASA’s Heliophysics Program and the National Science Foundation have responded to the strategies, goals and priorities set forth in the 2013 National Academies decadal report, “Solar and Space Physics: A Science for a Technological Society.”

The group will also describe the most significant scientific discoveries, technical advances and programmatic changes in solar and space physics since the survey’s publication five years ago.

Nykyri and her fellow committee members will further “recommend any actions that could be taken to optimize the science value of the Agencies’ programs” and suggest ways to enhance the careers of scientists and engineers in the solar and space physics community.

The committee’s conclusions are currently scheduled for release in late 2019.

A Golden Age of Space Physics

“The past 10 years have been an exciting time for heliophysicists,” Nykyri said. “With multiple simultaneously operating space missions, we are living in the golden era of Space Physics. We’ve gotten glimpses of the heliosphere – the furthest edge of the solar system – as well as the magnetosphere. We’ve unraveled the physics that allow solar-wind plasma to enter our planetary backyard, and the origins of energetic particles.”

Nykyri added, however, that space physicists still have many mysteries to unravel. In particular, as modern society increasingly depends on satellite-based GPS technology and electricity, it will be important to develop better prediction time for space weather hazards to protect space-based and ground-based assets and infrastructure, she said.

“In the future, this could be achieved by constellation missions at critical locations close to the sun and Earth,” Nykyri added. “I’m tremendously honored by the National Academies’ invitation to serve on such a prestigious committee that will help guide future research directions in this field that I love.”

Nykyri’s research has focused on the physical mechanisms that transport, heat and accelerate plasma at the boundary layers of the Earth’s magnetosphere. As a doctoral student, she demonstrated how a phenomenon called Kelvin-Helmholtz (KH) instability, which generates large vortices or “space hurricanes” as the solar wind sweeps by the Earth’s magnetic boundary, can generate magnetic reconnection. This occurs as a secondary process that leads to significant  plasma transport over magnetic boundaries.

She has also studied how these KH waves form and evolve at the boundary of the Coronal Mass Ejections (CMEs), giant clouds of plasma that explode from the sun into the heliosphere. Understanding how KH instability evolves in the CME boundaries is important as it can affect their drag properties, which could make CMEs turn away from their original direction. Her research could also shed light on long-standing fundamental questions about how the solar corona is heated.

A National Science Foundation Early Career Award winner and Embry-Riddle Researcher of the Year in 2010 and 2018, Nykyri serves as associate director for the Center of Space and Atmospheric Research and as director of the Space Weather Division.

“Embry-Riddle’s Department of Physical Sciences is home to many exceptional, internationally recognized faculty members, including Dr. Nykyri,” said Dr. Karen Gaines, dean of the College of Arts & Sciences. “We’re extremely proud of her latest recognition, in being invited to contribute to a National Academies’ report. By reporting on her achievements, we hope they will be an inspiration to young people interested in pursuing careers in this field."