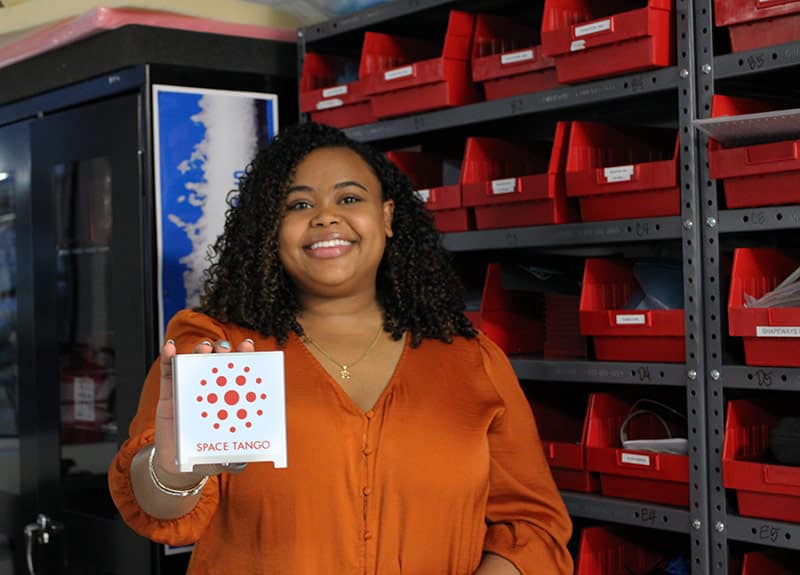 Danielle Rosales, holding a Space Tango “Cube Lab,” started at ERAU in Space Physics but realized she was more interested in telling the story of spaceflight.

For some students, the path to success sometimes takes some unforeseen turns.

That’s what happened to Danielle Rosales -- and to this day she is grateful she attended a university with the adaptability that allowed her to indulge a growing passion and turn it into a rewarding career.

“Sometimes what you think is a perfect fit is actually leading to something else that’s an even better fit,” said Rosales, who graduated in 2018 with a Communications degree and is now a Marketing and Sales Associate at Space Tango, a Kentucky-based company that leverages microgravity to develop a commercial market in space that improves life on Earth.

The 24-year-old’s love affair with spaceflight began as a little girl at  the NASA Goddard Visitor Center in Maryland. Rosales was smitten as soon as she reached the visitor center.

“It was the best thing that ever happened to me,” she said. “From that moment on, I knew that I wanted to somehow be involved with spaceflight.”

She graduated high school at a U.S. military base in Japan where her father was working, and she heard about Embry-Riddle thanks to its reputation for providing online education to those serving the country.

“Embry-Riddle won me over,” Rosales said and she headed to Daytona Beach to start classes, intending to major in her early interest - Space Physics.

But a class in communications grabbed her attention and she realized that what she really wanted to do was tell stories about spaceflight. She found that the passion for writing and storytelling she first felt as editor-in-chief of her high school paper was growing --- and it soon outpaced her love for physics.

“It was hard at first,” Rosales said. “I had that conflict between what I said I would do as a student and what I really wanted to do. Communication was just a stronger passion that I connected with more and had briefly ignored when I entered college with a desire to satisfy expectations. ”

With encouragement from Associate Professor Steven Master, Rosales set out after her new dream. Shortly after, she met Embry-Riddle alumna Michelle Lucas, a NASA veteran who now runs the Higher Orbits Foundation, a non-profit company that uses space to excite students about science, technology, engineering, math, teamwork, and leadership.

That connection ultimately helped Rosales land an internship at Space Tango, which was then about two years old. The internship that started in January 2017 quickly turned into a full-time job offer, and Rosales worked part-time for the company until she finished her degree.

She said her education at Embry-Riddle had her “beyond prepared” when the opportunity came.

“I was confident in what I knew,” she said. “I know I have so much more to learn, but I got a great start.”

Today, Rosales is thrilled to be telling the success story of Space Tango, which works closely with NASA, the ISS National Laboratory and other industries interested in space and has so far launched 83 payloads into orbit.

“I am beyond satisfied and I realize how fortunate I am,” she said. “That’s one reason I stay in close touch with people at Embry-Riddle, so I can help others do what I did. I know it can be intimidating to start out, but I know it can work.”

Rosales is already showing her appreciation to ERAU by creating opportunities for current students, according to Associate Professor Matt Sharp, program coordinator of ERAU’s Communication program.

“Embry-Riddle alumni are so willing to help our students out, and this is a great example,” Sharp said.