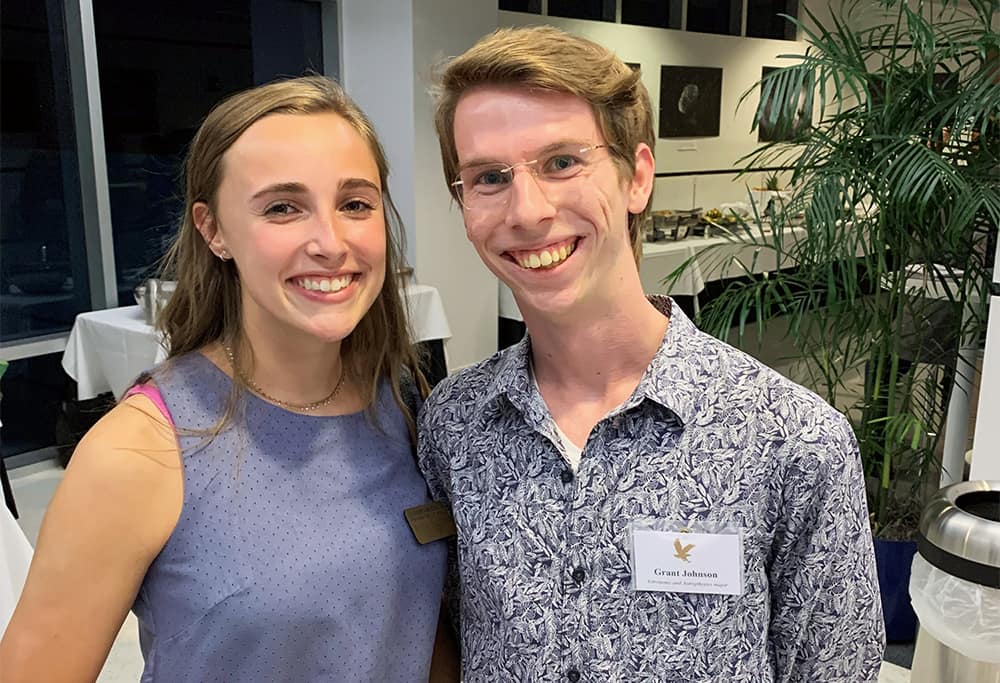 Both astronomy and astrophysics students with second majors in computational mathematics, Emma Galligan and Grant Johnson have been study partners for the past four years. Both students share a passion for learning and have sky-high career aspirations.

In addition to his coursework, Johnson, who is a Goldwater Scholar, is researching fusion energy for the U.S. Department of Energy’s Lawrence Livermore National Laboratory.

“I want to make a difference in this world and I think fusion can provide an alternative clean energy source,” he says.

Galligan and Johnson are both seniors in the honors program at Embry-Riddle’s Daytona Beach Campus. They both plan to graduate in May 2020 — and credit scholarships for helping them fund their education.

“[The scholarship] allowed me to not have to work as much on campus and to be able to focus more on my studies,” Galligan says.

Johnson agrees: “I cannot tell you how much I appreciate the investment in my future.”

Growing up in Pittsburgh, Galligan always liked science, but she discovered her love of astronomy at Embry-Riddle. The university’s astronomy program was small and supportive, allowing her overcome her shyness and thrive academically and socially.

“I found other people who shared the same interests,” she says.

Now vice-president of the Amateur Astronomy Club, Galligan loves teaching others about the stars and planets. The club hosts astronomy open houses for the community, drawing hundreds of attendees to gaze up at the night sky.

“We get people from all age groups who are interested in astronomy and space,” she says.

This past summer, Galligan was chosen for a National Science Foundation Research Experience for Undergraduates (NSF REU) to study alongside professors at Louisiana State University. Her work included identifying new x-ray binary stars in the galaxy.

“It definitely confirmed that I want to do research and get into academia,” says Galligan, who plans to earn a doctorate in astronomy and become a professor. “And, it reinforced my passion for astronomy.”

Graduating from high school in Tampa, Florida, Johnson was initially interested in studying aerospace engineering at Embry-Riddle, until he took a course in astrophysics.

Like Galligan, he says, his astronomy professors gave him the support and hands-on undergraduate research experience he needed to achieve his goals. The university’s Career Services office also connected him with the Science Undergraduate Laboratory Internships (SULI) program, which led to an eight-month internship at Lawrence Livermore National Laboratory.

“I was fortunate enough to study under its pioneering theoretical magnetic fusion energy group,” Johnson says.

This year, Johnson was named a 2019 Barry Goldwater Scholar. The highly selective and prestigious national scholarship supports college students studying the natural sciences, engineering and mathematics, who are poised to become the next research leaders.

“[The Goldwater Scholarship] opens up so many doors for my future and provides a head-start on my career as a researcher,” says Johnson, who has already had two papers published in peer-reviewed research journals.

After graduation, Johnson plans to pursue a doctorate in plasma physics and focus on research in fusion energy.

“None of this would be possible without the superb education I have received at Embry Riddle and scholarships that support my education,” he says.