Former FAA Administrator to Students: Find a Mentor and Seize the Day 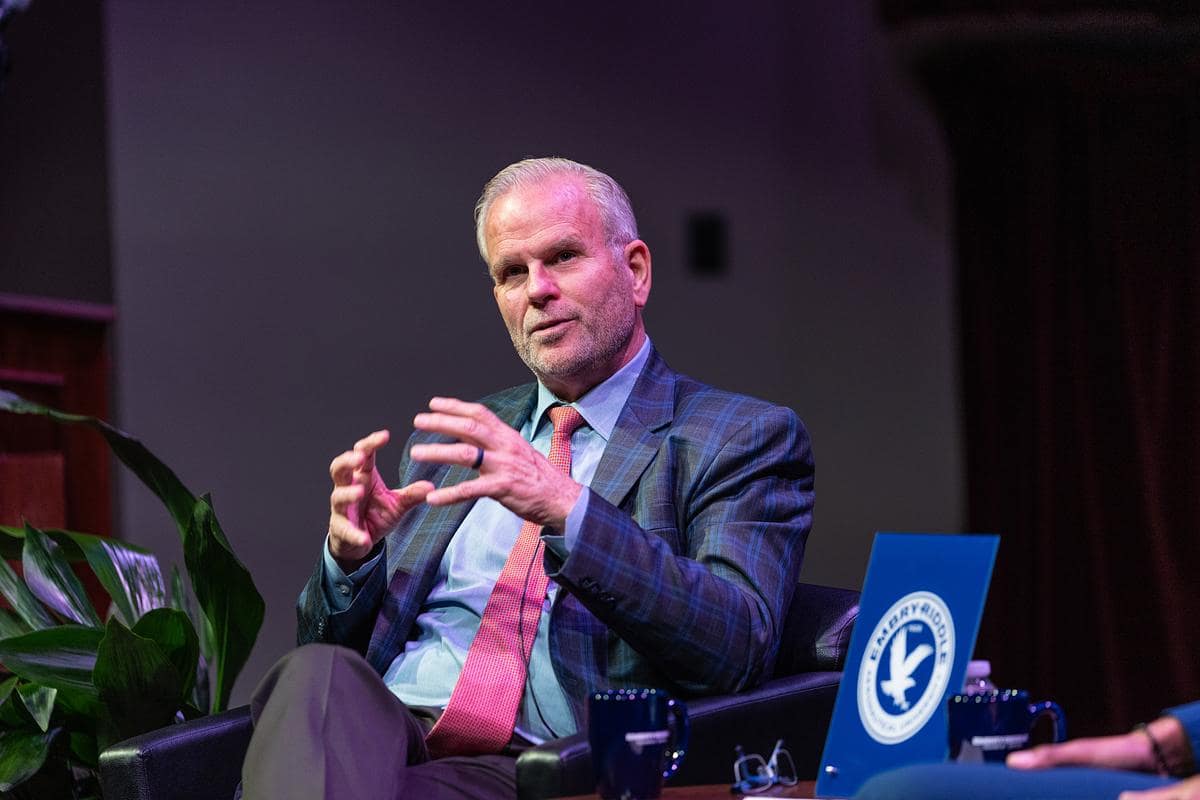 Dan Elwell, former FAA administrator and a pilot with more than 6,000 hours of civilian and military flight time, spoke to an engaged audience on Embry-Riddle Aeronautical University’s Daytona Beach Campus last week, offering advice drawn from a varied and exciting career in aviation.

The event was part of the university’s Presidential Speaker Series.

Elwell’s lifelong passion for aviation started when he took a ride in the flight deck of a plane flown by his elementary school teacher, who was also a private pilot. He later graduated from the U.S. Air Force Academy and earned his pilot wings at Williams Air Force Base then flew for American Airlines for 16 years, also working as a managing director for international and government affairs for the airline. Elwell served two stints at the Federal Aviation Administration (FAA), during two presidential administrations.

In a session moderated by Calvin Freeman II, a senior in the David B. O’Maley College of Business, Elwell, now president of Elwell & Associates, LLC, offered students solid advice on how to proceed in an aviation career — and in life.

“Mentorship is probably the single most important thing you can do,” Elwell said, explaining that “professionally, I was very fortunate to have people whose opinion I trusted and put great faith in, and I used them mercilessly to get counsel on some of the things I’ve done.”

“I have always followed the philosophy that if you can’t find a real valid reason not to do something that you want to do — as long as it’s worthwhile, good and legal — then you should do it. Seize the day!”

Elwell added that students shouldn’t limit themselves based on others’ opinions. He sometimes took steps in his career that didn’t seem fully logical, he said, such as when he left American Airlines before reaching retirement age. At the time, Elwell was a DC-based B-757 pilot also working in Washington on aviation policy. On the morning of 9/11, while on the phone with the Pentagon about his scheduled promotion ceremony later that day, AA flight 77 hit the building. He had flown that very flight many times with the captain and flight attendants who perished on the flight.

Sometime after that, he got a call from the White House asking if he would be interested in a political appointment at the FAA, and he accepted.

“I’ve done a lot of different things in my life, but I can’t think of a discipline that requires the pursuit of quality — attention to detail and concentration — more than aviation.”

Don’t Be Afraid to Make Decisions

Elwell said that, wherever life takes Embry-Riddle students, the ability to gather necessary information and make decisions based on it is crucial.

“Whether you’re on a flight deck with seven crew members or you’re in the executive suite at the FAA, get the feedback, get the information, distill it and make a decision,” Elwell said.

Elwell said some of the decisions he had to make at the FAA were extremely difficult and sometimes involved “wading through” politicized situations.

“That makes your focus all the more important,” he said, on making “the right decision, the safe decision as best as you can.”

Having spent a day touring Embry-Riddle and its flight facilities, Elwell was exuberant in his praise.

“This is a school I’ve always had a lot of respect for, and that respect went through the roof today,” he said. “When you’ve lived your whole life in aviation and you go to an aviation school, it’s like Disneyland. Everywhere you look, you see aviation excitement. This is top-notch. I hope everyone who’s in an aviation discipline appreciates what you have here.”

“In aviation, you can have a path that is not linear,” Elwell said. “Take away from this that you can do anything. I’m proof of that. I don’t have an engineering degree. I have a political science degree, for Pete’s sake.”