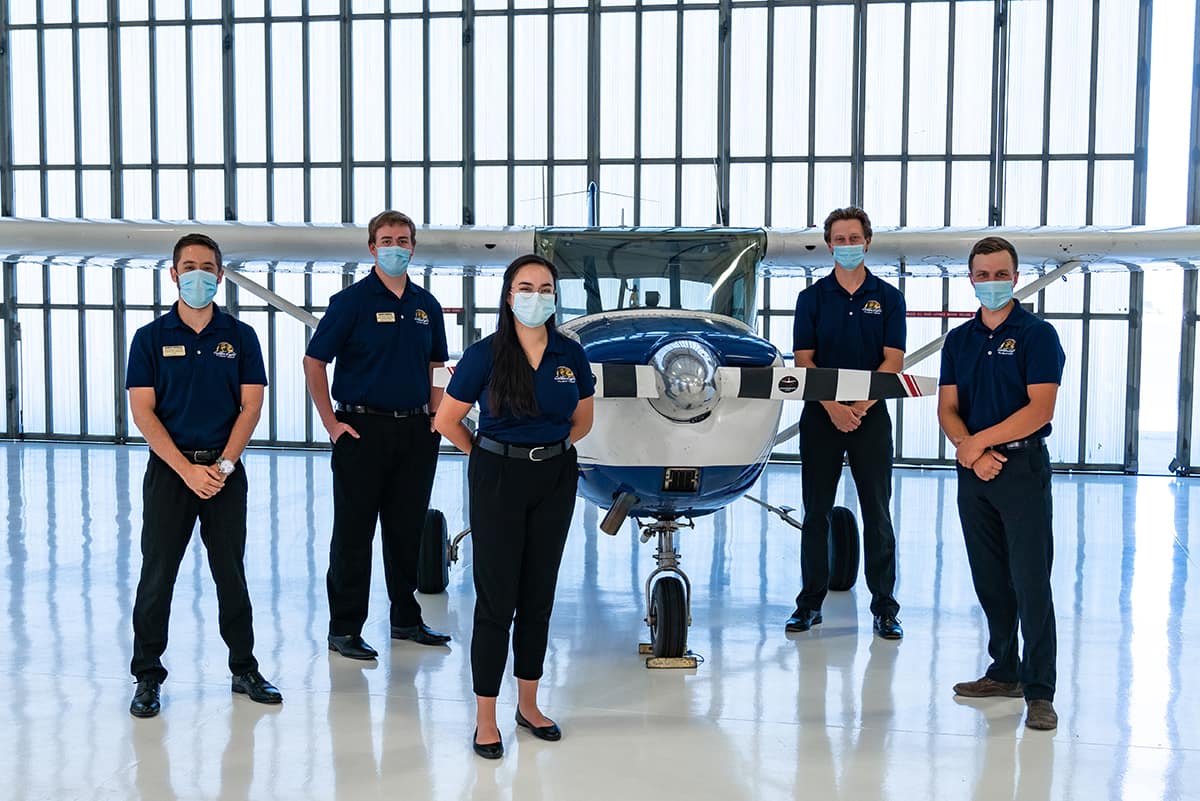 Share:
With more than 20 members eligible this year to compete in flying events and just two airplanes, the Golden Eagles Flight Team needed another set of wings.

“That is the highest number [of members] we’ve had in recent team history,” said Colin Ho-Tseung III, the team’s captain. “As a result, we are seeing more difficulty in scheduling flights evenly across all team members.”

Fortunately, thanks to the Golden Eagles Flight Team Aircraft Enhancement Fund — which is supported by philanthropic gifts — the team will soon add a third refurbished Cessna 150 to its fleet.

“Having a third aircraft will make it easier for each and every member to practice,” said Ho-Tseung, who has been on the flight team since 2016, his first year as a student at the Prescott Campus. “We are incredibly grateful for the enhancement fund. All of the money goes to helping the team achieve its competitive goals, which is something that highly motivates the team.”

The fund was created to provide repairs, retrofits and upgrades to flight team aircraft and it is currently allowing the newest airplane, Eagle 3, to be reconditioned and painted.

College of Aviation Dean Timothy Holt said the additional aircraft will allow the team more training and competition opportunities, especially when one aircraft is out for inspection or routine maintenance.

“Financial gifts to the college provide support for our students and this is a prime example of that,” Holt said.

The Golden Eagles Flight Team is a major source of pride for the university. The team has won the past 34 consecutive regional championships and 12 national championships. In 2017, the Golden Eagles Flight Team was inducted into the San Diego International Air & Space Museum’s Hall of Fame as the winningest intercollegiate flying team of the last two decades.

“This team was actually the first student organization on the Prescott Campus,” Holt said. The team’s long history of dedication and success is an example of the high caliber of flight students who attend Embry-Riddle. “It’s also inspirational for future pilots,” Holt said.

Golden Eagle applicants go through a six-week tryout period during which they learn the basics of core ground events, plus undergo a team-wide interview. Team members train several days a week, plus most weekends, to prepare for competition. And the competition is steep. Annually, more than 30 collegiate flight teams vie for the coveted championship award at the National Intercollegiate Flying Association’s Safety and Flight Evaluation Conference (NIFA SAFECON).

Last year, the Golden Eagles won the regional competition, again, Holt said, but NIFA SAFECON was cancelled, due to the coronavirus pandemic. The team is currently training for 2021 competitions, which are tentatively scheduled.

Ho-Tseung said being on the flight team for the past four years has been an amazing experience.

“Being a part of this team is incredibly rewarding, because you get to help out those around you and, in that way, you benefit, too,” he said. “There's no feeling better than watching your teammates succeed.”