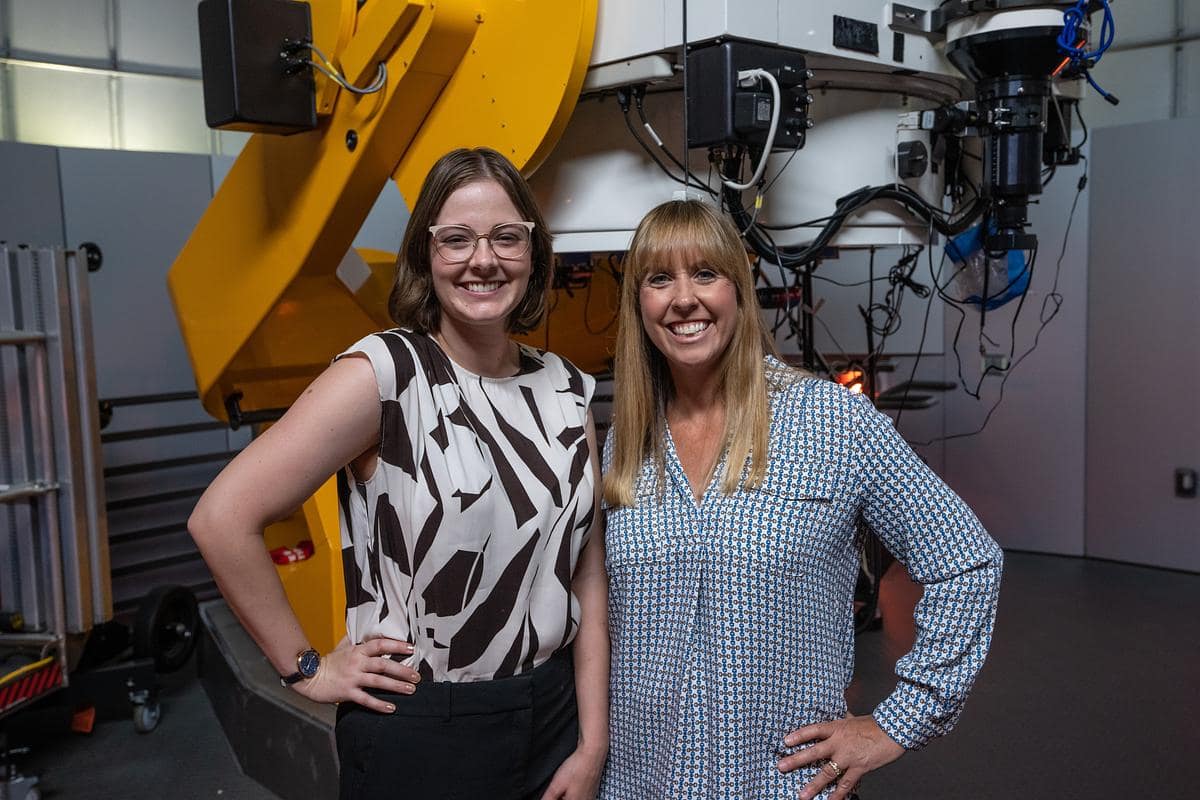 Graduate student Kayla Taylor, mentored by professor of Humanities Dr. Ashley Lear, will present a unique study on women in astronomy, at the International Astronautical Congress (IAC) in Paris this fall. At the same conference, she will also present an original piece on the impact that mega-constellations will have on astronomy.

Taylor, who finished her undergraduate degree in Astronomy and Astrophysics in May 2021, is now completing a master’s degree in Aviation, with a focus in Space Studies. Her IAC presentation with Dr. Lear uses Adrienne Rich’s poem, “Planetarium,” as a lens for evaluating some of the issues faced by women in astronomy, including Dame Jocelyn Bell Burnell, who spoke at Embry-Riddle in 2020 and spent time with Taylor.

“Hearing Burnell’s experiences firsthand completely changed my outlook on what it means to be a woman in science,” Taylor recalled. “As a female graduate student, Burnell’s research earned a Nobel Prize in Physics, yet she was not recognized for it. All the credit went to her male graduate advisor. Hearing this story in person sparked a fire inside of me.”

A dinner and on-campus luncheon with the legendary astronomer prompted Taylor to take a closer look at the challenges facing women in science.

“Raising awareness of the persistent discrimination in the Physical Sciences is critical so that this discrimination can be properly identified and addressed,” the Sarasota, Florida, native said. “Using Rich’s metaphors to evaluate my own experiences helped me understand that I had unknowingly tolerated gender bias at various times throughout my life.”

Taylor and Lear looked to second-wave feminist Adrienne Rich, author of “Driving into the Wreck and Of Woman Born,” and her 1968 poem, “Planetarium,” which celebrates the career of Caroline Herschel, while eluding to other astronomers such as Bell Burnell. “A woman in the shape of a monster,” Rich’s poem begins, “a monster in the shape of a woman / the skies are full of them.”

In stark, powerful language, “Rich uses astronomy as a metaphor for her and other women scientists’ experiences as they struggle to tune out the noise of obligations, expectations and invisible labor, and strive to locate the signal representing individual motivation and discovery,” Taylor and Lear write.

Bell Burnell, for example, once recalled being greeted by “whistles, cat calls and the thumping of desks by the male students.” In the poem, this discriminatory “noise” may be compared to interplanetary scintillation – the twinkling of celestial radio sources caused by solar wind. “Just as the irregularities in solar wind deflected by the radio wavelengths from Bell Burnell’s pulsar, so too did Bell Burnell deflect the discrimination she experienced in her field to find meaning in her vocation,” Taylor and Lear write.

Similarly, there is a historical tendency of male astronomers to rely upon uncredited women to complete menial or administrative work – a phenomenon experienced by Payne-Gaposchkin. Rich’s poem uses a metaphor of a “woman in the snow among the Clocks and instruments.”

According to a 2020 study (by Berné and Hilaire), cited by Taylor and Lear, “only 18% of the members of the International Astronomical Union (the largest organization of professional astronomers) are women.” Only 27.8% of women are employed in the Physical Sciences, the National Science Foundation has found.

“For women to play a role in astronomy,” the authors conclude, “they must be present and participating.”

In addition to her academic studies, Taylor serves as a writing tutor for the School of Graduate Studies in the College of Aviation. She plans to pursue a Ph.D. in Astronomy or Earth Science. “I was impressed by the small class sizes and the unique curriculum that Riddle’s program offered, especially the Observational Astronomy course that allowed me to conduct research-grade observations on the 1-meter telescope on top of the College of Arts and Sciences,” she said.

Although Embry-Riddle is mainly known as a top aviation and aerospace university, Lear noted that Humanities and Communication courses help students improve their communication skills, which will serve them well in whatever career they choose. “Being able to present work at an international conference is also an extraordinary learning opportunity for any student,” Lear added. “We’re both excited to attend the event and present our work in Paris.”