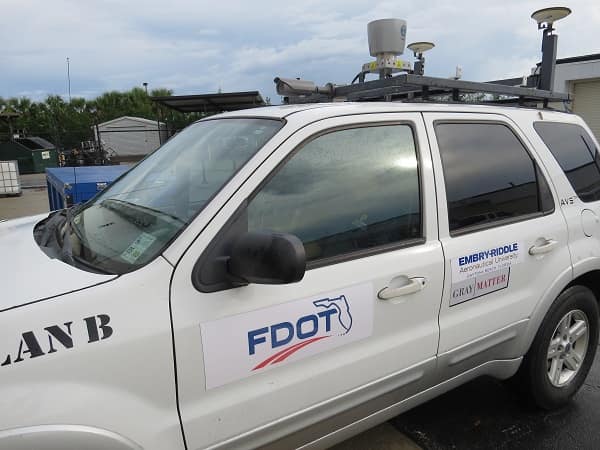 The autonomous vehicle is being developed by the College of Engineering.

A team of researchers from the College of Engineering at Embry-Riddle Aeronautical University’s Daytona Beach Campus have begun a 14-month research project for the Florida Department of Transportation (FDOT) to determine the viability of using autonomous vehicles for the inspection of roadways and airport properties, line painting and roadside trimming and mowing. The goal is to find a way to improve the safety of these operations and reduce the associated costs.

An autonomous vehicle, in this case, is a self-driving motorized vehicle, capable of sensing its environment and navigating without human input. FDOT has created the Florida Automated Vehicles (FAV) program to construct the framework for implementation of these technologies by developing research and pilot projects with university and industry partners, and by creating awareness of how they support FDOT’s vision of delivering a transportation system that is free of fatalities and congestion.

“We’ll be using a Velodyne LIDAR (light detection and ranging), Continental Automotive Radar, a GPS/ Inertial Navigation System for localization and a visible light camera,” said Thompson, who is pursuing a Master of Science degree in Mechanical Engineering. “Participating in this project has allowed me to increase my own capabilities in the field of autonomous vehicles and environment perception.”

The Ford Escape will gather data in various weather conditions, high-traffic areas and roadways where construction will occur. The preliminary findings of the project will be presented at the Florida Automated Vehicles Summit in Jacksonville, Fla., on Dec. 1-2, 2015. The Embry-Riddle autonomous vehicle, named Plan B, will be on exhibit at the conference and attendees will get to sit in the vehicle and see the world as the vehicle would see it via a live data stream from the LIDAR and radar sensors.

Learn more about the Florida Automated Vehicles program at automatedfl.com.

Learn more about the Department of Mechanical Engineering in the College of Engineering at Embry-Riddle’s Daytona Beach Campus.