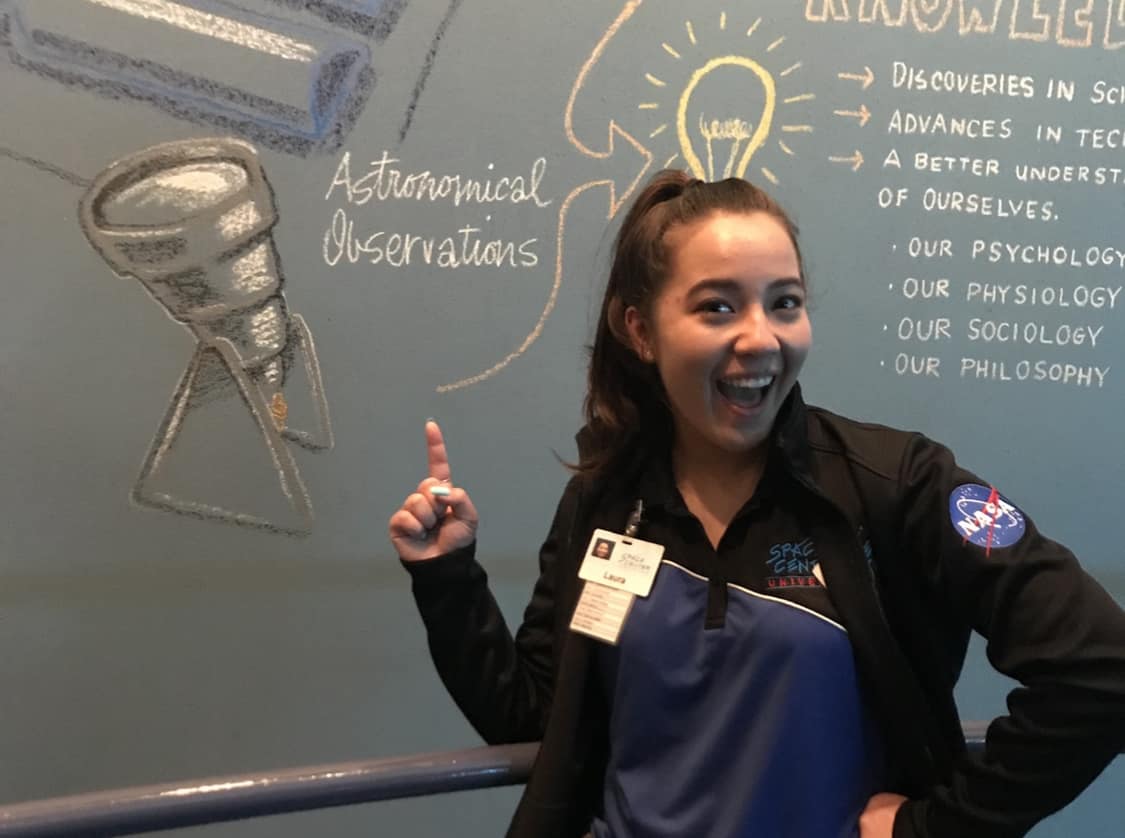 While she was an undergraduate student at Embry-Riddle, alumna Laura M. Lee completed an internship at Space Center Houston. She also helped solve a major astronomical riddle and co-authored a research article in a leading journal. (Photos: Embry-Riddle)

Within the constellation Cygnus, an elderly star and its massive companion are having one last hurrah, flinging off mass at an incredible rate before they explode as supernovae and collapse into a black hole.

Now, researchers including recent Embry-Riddle Aeronautical University graduate Laura M. Lee have mapped the elderly star’s orbit around its oversized and equally ancient partner. In a scientific first, they have also determined the dynamical mass of both stars that make up a binary system called Wolf-Rayet 133.

The team’s findings, published Feb. 9, 2021 by Astrophysical Journal Letters, mark the first-ever visually observed orbit of a rare type of star called a Nitrogen-rich Wolf-Rayet (WN) star. The WN star in question is half of the starry dance duo in the WR 133 binary.

The WN star pirouettes around its partner star, an O9 supergiant, every 112.8 days – a relatively brief orbit, indicating that the two stars are close together, researchers reported. The WN star has 9.3 times more mass than our Sun, while the O9 supergiant is a whopping 22.6 times more massive, the team found.

The research opens a new window to the distant past when stars and planets were first beginning to form.

Wolf-Rayet type stars, so named for the astronomers who discovered them in 1867, are massive stars near the end of their lives, said Lee’s faculty mentor Dr. Noel Richardson, assistant professor of Physics and Astronomy at Embry-Riddle. They’re very hot, a million times more luminous than the Sun, and stellar winds have stripped off their hydrogen envelopes. That has made it difficult to measure their mass – a vital step toward modeling the evolution of stars – until now. 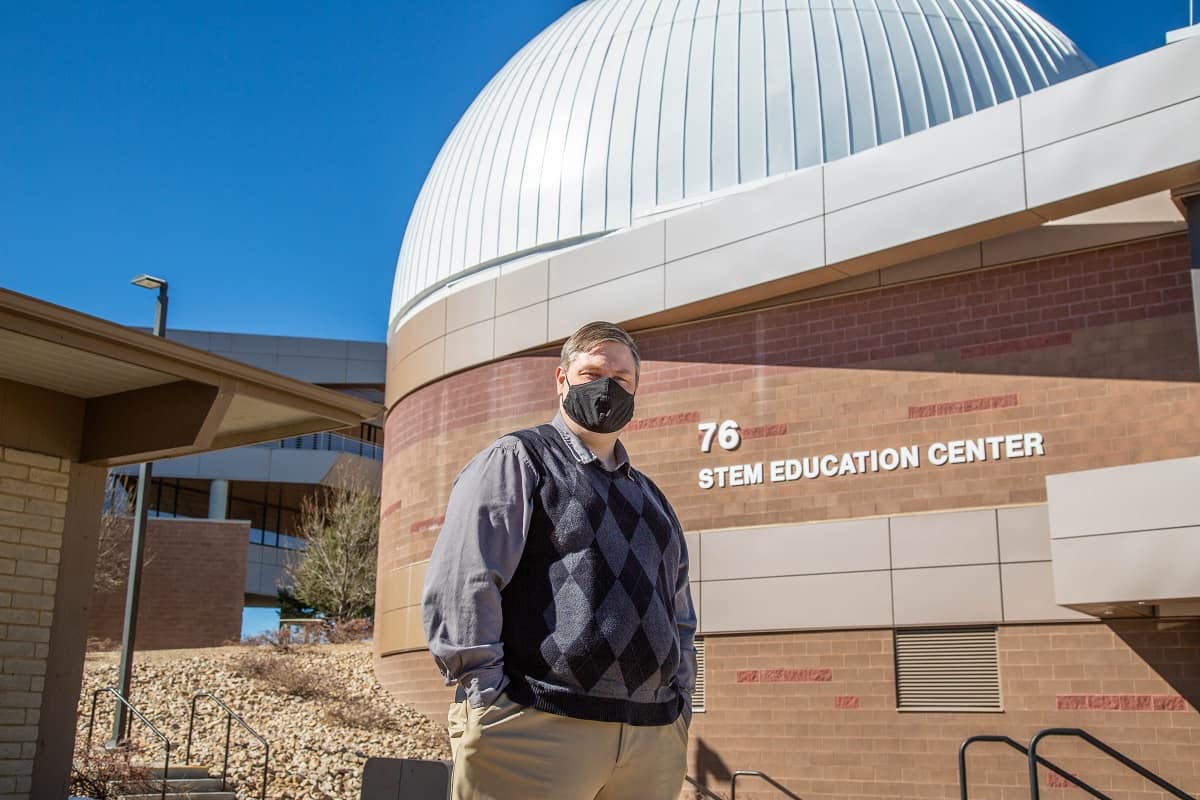 Because the pair of stars in the WR 133 binary are tightly coupled, they’ve likely exchanged mass, Richardson noted. “In the early universe, we think most stars were very, very massive and they probably exploded early on,” he said. “When these types of binary stars are close enough, they can transfer mass to each other, possibly kicking up space dust, which is necessary for the formation of stars and planets. If they’re not close enough to transfer mass, they’re still whipping up a huge wind that shoots material into the cosmos, and that can also allow stars and planets to form. This is why we want to know more about this rare type of star.”

Lee was still an undergraduate at Embry-Riddle when Richardson invited her to help solve an intriguing astronomy riddle, as part of her senior capstone project. Richardson had been analyzing data from the CHARA Array, a collection of six telescopes positioned across California’s Mount Wilson. The array, operated by Georgia State University’s Center for High Angular Resolution Astronomy, could pluck out celestial details smaller than the angular size of a dime in New York City from the telescopes near Los Angeles, California.

Lee’s specific task was to make sense of about 100 spectra – barcode-like graphs that reveal how much light a star is giving off. To better understand WR 133’s spectra, provided by Grant M. Hill of the Keck Observatory in Hawaii, Lee used computer code that allowed the team to measure how the two stars were moving. “These measurements are a necessary step because they tell us how the stars move back and forth from us, while the CHARA measurements told us how they move across the sky,” Richardson explained. “The combination gives us the ability to see a three-dimensional orbit, which then tells us the masses.”

At the time, Lee was laser-focused on earning her Embry-Riddle degree. “I didn’t really realize how big of an impact we were making in this field,” said Lee, a member of the Sigma Pi Sigma physics honors society who now holds an Astronomy degree with a Mathematics minor. “It was pretty exciting to be a part of the project, especially as an undergraduate student.”

'A Blue Marble in Space'

At the Armagh Observatory & Planetarium in Northern Ireland, one of the many institutions involved in the project, Andreas A.C. Sander said the team’s findings were somewhat surprising and will prompt researchers to rethink key assumptions. “The results are very interesting as they yield a lower mass than expected for such a star," Sander noted. "While this might sound like a detail, it will change our perception of the Black Holes resulting from collapsing Wolf-Rayet stars, a crucial ingredient in the astrophysical context of gravitational wave events."

Gail Schaefer of the CHARA Array noted that Richardson’s observations using the Georgia State University (GSU) telescopes on Mount Wilson – made possible through an open-access program at the facility – “will help improve our understanding of how binary interactions impact the evolution of these massive stars.”

Astronomer Jason Aufdenberg of Embry-Riddle, who has also used the CHARA Array, said that “the kind of work Noel is doing, establishing orbits, is very important because they can get the masses of these things. Knowing about these very hot stars, how many there were and their luminosities is all part of understanding what happened in our universe after the Big Bang.”

Now at the beginning of her career, Lee said she hopes to keep learning and being amazed by our universe. “We are on a blue marble floating in space,” she said. “It’s important to learn more about the complexities of the universe around us. Humans are born to learn. Any knowledge we can gain is a gift.”

The Astrophysical Journal Letters paper is entitled “The First Dynamical Mass Determination of a Nitrogen-rich Wolf-Rayet Visual and Spectroscopic Orbit.”