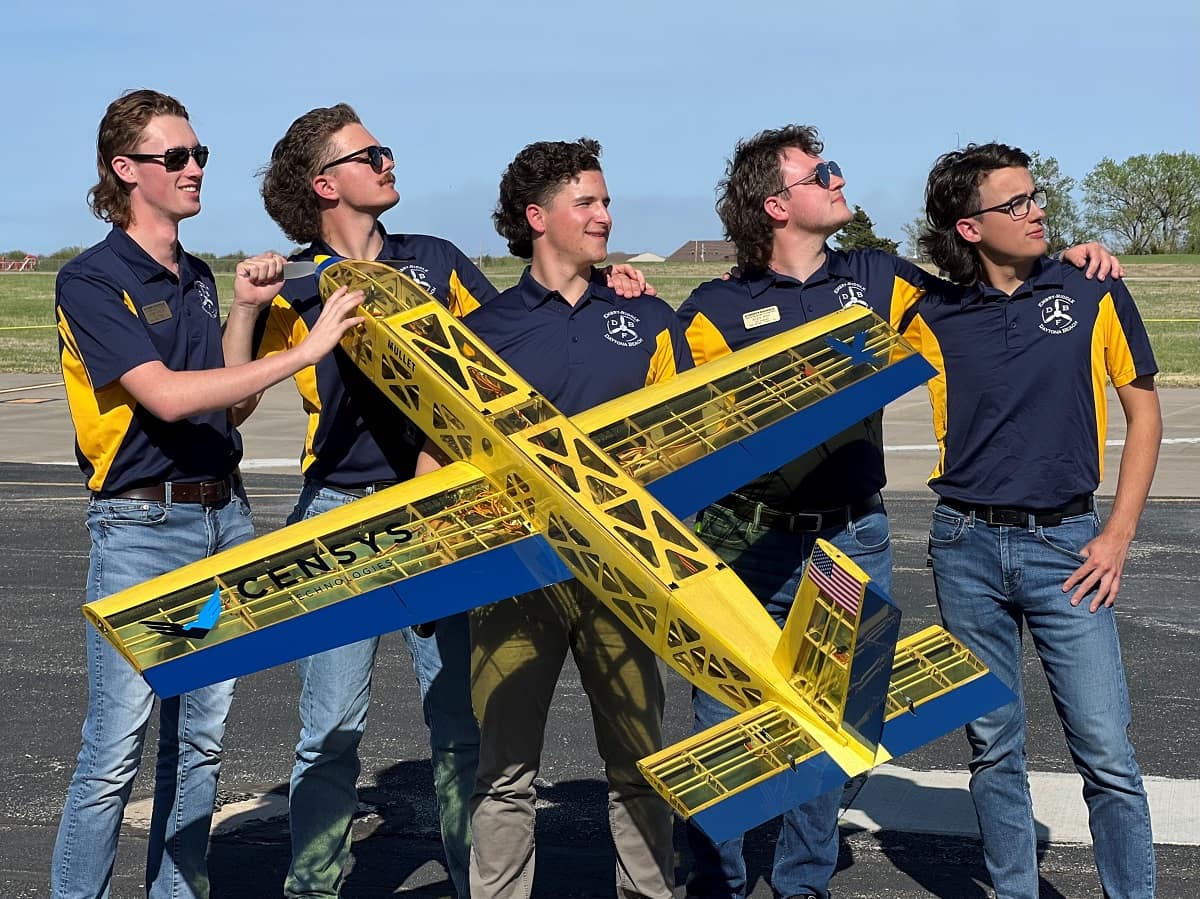 A team of Embry-Riddle Aeronautical University students recently made school history by placing second in this year’s Design, Build, Fly aircraft competition hosted by the American Institute of Aeronautics and Astronautics (AIAA).

“This is a highly competitive event, and this year is our best-ever finish,” said Dr. James Gregory, dean of the College of Engineering at Embry-Riddle’s Daytona Beach Campus.

The team’s aircraft is named MULLET, which stands for Medical Unmanned Low-Level Electric Transport. For good luck, several members of the 40-person team even grew their hair out long in the back and rocked mullet haircuts at the competition.

“When we started designing the aircraft, we needed to come up with an interesting name. This acronym kind of fit perfectly,” said Joseph Ayd, the senior Aerospace Engineering student who led the Daytona Beach team. “Our senior design team all grew mullets, and a few underclassmen joined us. We just got them cut for graduation pictures.”

This year’s competition, which 69 teams attended, required students to design and produce a medical support aircraft that could transport syringes and deliver vaccine vial packages. Entries were scored based on how many syringes and packages could be carried, plus the aircraft’s speed and performance.

Watch the team's year-in-review video, which outlines the aircraft's construction and recaps Team MULLET's performance at the competition.

Students must develop an extensive range of skills to succeed in this competition, fully demonstrating that their aircraft can fly and efficiently perform the required missions, said Leishman. This year, with the advantages of a growing knowledge base and lessons learned from previous years, Embry-Riddle ranked first place in the fly-off part of this competition, he said.

Ayd, who is from Baltimore, Maryland, has been a member of the team since he was a freshman. During that time, he said he has learned everything from engineering to leadership skills.

“I have contributed to building 10 Embry-Riddle aircraft and was on the engineering design team for this one, so the technical knowledge has been exceptionally rich,” he said. “Being the leader of a 40-person engineering team, I have learned so much.”

Additionally, the team worked briskly to accelerate their schedule early in the year, flying their first prototype just nine weeks after the requirements were released in September. 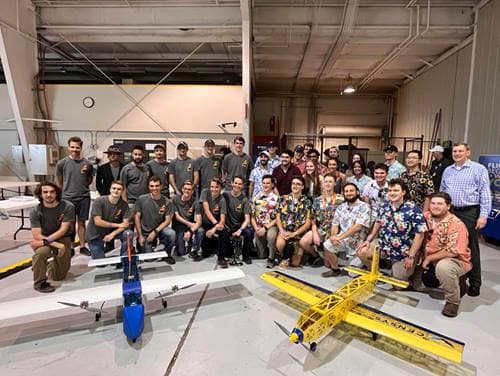 “My team put in about 9,000 hours of work on this project,” Ayd said. “We failed early and often, crashing our first aircraft and redesigning structures throughout the year. We did some aerodynamic tests in the wind tunnel to ensure we could meet critical requirements even before first flight. Getting in the wind tunnel was extremely important for us to have that data early on in the design process.”

About half of the team members were able to attend the April 21-24 competition, held in Wichita, Kansas.

“It was a lot of pressure, very fast-paced,” said Ayd. “It was so much fun, though.”

One big point of pride for the team is that more than 50% of its members currently have a full-time job, internship or summer research opportunity, he added. After graduating May 9, Ayd was hired by The Boeing Company to work as an aerodynamic test engineer in St. Louis, Missouri.

“We’re really proud of that,” he said. “It affirms that what we are doing in this club is developing skills that are critical to working in the industry. “

Embry-Riddle students from the Prescott, Arizona, campus also competed, with their team placing 8th at the competition.

Students and faculty from both campuses noted the camaraderie the two Embry-Riddle teams shared.

“The Prescott team was in the space right next to ours for all four days of the competition,” said Camdyn Doucette, a Daytona Beach team member. “We were exchanging information with them and we were happy to help any teams who needed it during competition. I’m proud of how both Embry-Riddle teams were able to share and conduct themselves.”