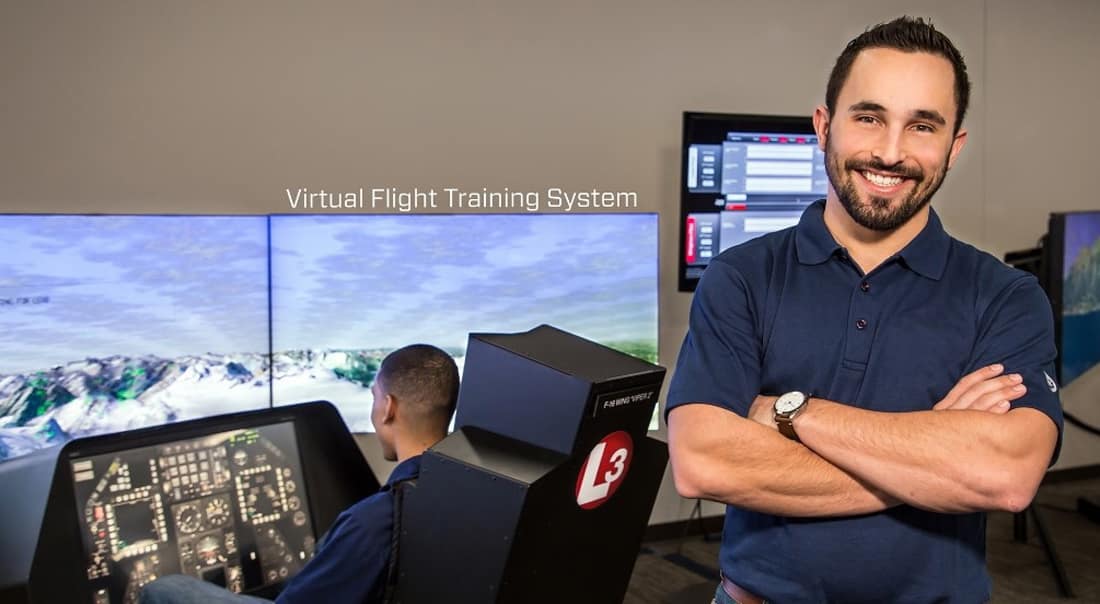 It used to be that if someone wanted to pilot medium- and high-altitude Unmanned Aircraft Systems (UAS), they would need to commission as an officer in the military or complete a seven-month certification process. That may be changing as L3 Link Training & Simulation explores the development of future UAS training capabilities.

“The program with L3 allowed us to apply our aviation and UAS knowledge on future large-scale UAS training concepts,” said Hunter Tedrick, a senior in Embry-Riddle Aeronautical University’s Unmanned Aircraft Systems Science track, and one of the first two people to complete L3’s program. “There’s a pilot shortage and a training need that has to be filled. L3 is trying to fill that void.”

Tedrick was joined in the program by alumnus Blake Haubold ('18), another UAS major who now works at L3 as a test director. Together, the two became the first in the country to contribute to the testing and evaluation of experimental new technologies and approaches to UAS pilot training at L3 Link’s headquarters in Arlington, Texas.

“This is a unique and special program,” said Dr. Dan Macchiarella, professor of Aeronautical Science. “Both students acquired valuable experience through L3. I know of no other university where this is occurring.”

The Path to Piloting Large UAS

Growing up, both Haubold and Tedrick wanted to be pilots — but not just any pilots. They wanted to be hands-on and use their knowledge of flight to affect change throughout the industry. They found that outlet in the field of UAS.

“I wanted to find an aviation career that would have an application with my background as a cattle rancher from rural north Texas,” Haubold said. “Naturally, my attention was directed to the strides being made to incorporate UAS into crop and livestock production.”

Although they each entered their college careers with Private Pilot Certificates and eyes toward manned flight — Haubold was an Aeronautical Science major, Tedrick began in Aerospace Engineering — the pivot toward UAS quickly seemed like the better fit.

“I wanted to impact something, and the UAS industry is so new,” Tedrick said. “It’s the perfect hybrid between engineering and piloting.”

The best part, for Haubold, is how well the two fields complement each other. He didn’t need to give up cockpit flying in order to take the controls of a UAS, he said. In fact, he became more involved in the aviation community after making the transition, seeking to learn as much as possible through others, as well as through his own recreational flight hours.

“Most days and weekends after my UAS classes, I would load up my Mooney (aircraft) and throw a dart on a sectional, or decide to take a weekend trip to visit friends all over the Southeast,” he said. 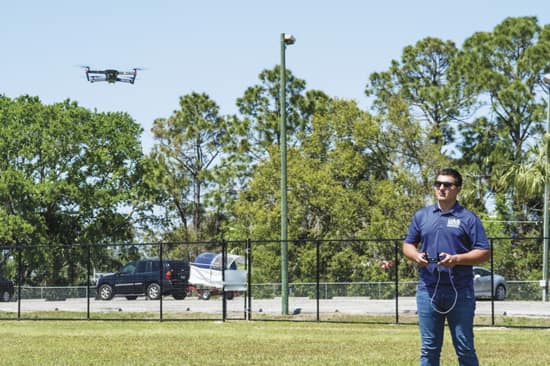 Hunter Tedrick, Unmanned Aircraft Systems Science senior, will graduate in May and already has an operations technician job lined up in his home state of Pennsylvania. (Photo: Embry-Riddle/Daryl Labello)

Above all, though, Haubold credits his education for preparing him for L3’s training opportunity.

“I cannot overstate how much of the UAS curriculum at Embry-Riddle carried directly over to developing new training approaches,” he said. “I fully contend that my coursework as a UAS student made developing a way to train pilots of large UAS aircraft, with thousands of documents outlining how to operate large aircraft, feel like the first time I rode a multi-geared bicycle. Different, but all too familiar.”

For Tedrick, who has learned to fly about 15 different types of planes in his lifetime, it was more about adaptation. He makes it a point to challenge himself, which is part of what led him not only into the field of UAS but also into leading the UAS Tech Club and an ERAU team in Association for Unmanned Vehicle Systems International (AUVSI) competitions. That experience opened the door to L3, he says, and he believes that the experience he received there will continue to open doors long after graduation.

“The people that come out of L3’s future programs are going to be so much more marketable than anybody else coming into the industry,” he said. “If you don’t adapt, the world moves on without you.”

In order to take part in L3’s program, participants are required to have a Commercial Pilot Certificate, experience with UAS, and the ability to obtain a security clearance. Those requirements are standard, but the rest of the program is anything but status quo. Rather than focusing on just one certification, for instance, it prepares students for several, and in much less time.

Despite the newness of the approach, though, Tedrick and Haubold both felt prepared. The only thing they didn’t get from their coursework at Embry-Riddle, they say, was a clear vision of where, exactly, they would go, career-wise, after graduation. The program helped to quickly alleviate those fears.

“Admittedly, there were times I was in class struggling to imagine myself applying all this knowledge,” Haubold said. “The way the industry is currently, the roadwork is still being set up, so it can be intimidating. But once I got the chance to apply it in the simulators, all that uncertainty disappeared.”

Haubold and Tedrick are already realizing the benefits of participating.

“I’ve already had a lot of job offers,” Tedrick said. “The opportunities will be endless.”

“Being able to help pioneer a new path for commercial UAS was a catalyst for realizing what I can do for this industry,” Haubold added. “With the knowledge I’ve gained, I’m better able to identify where the UAS industry is and what I can do to make any possibility a reality.”

To Macchiarella, the program also works to highlight a valuable pipeline for talent into the industry.

“L3 is demonstrating that university-educated students studying unmanned flight and operations are a ready source of pilots for this type of UAS,” he said. “The traditional pipeline is very different.”

Tedrick and Haubold agree, even envisioning a future where similar internship opportunities are woven into the UAS curriculum, offering students “real-world” experiences sooner in their academic careers to help them explore the field’s many possibilities.

“I have a whole new appreciation for the technology and the people who use it,” Haubold said. “Talking about the theories in class and exploring concepts was one thing, but being in the seat and actually using it was a fantastic view into the world of unmanned aviation.”