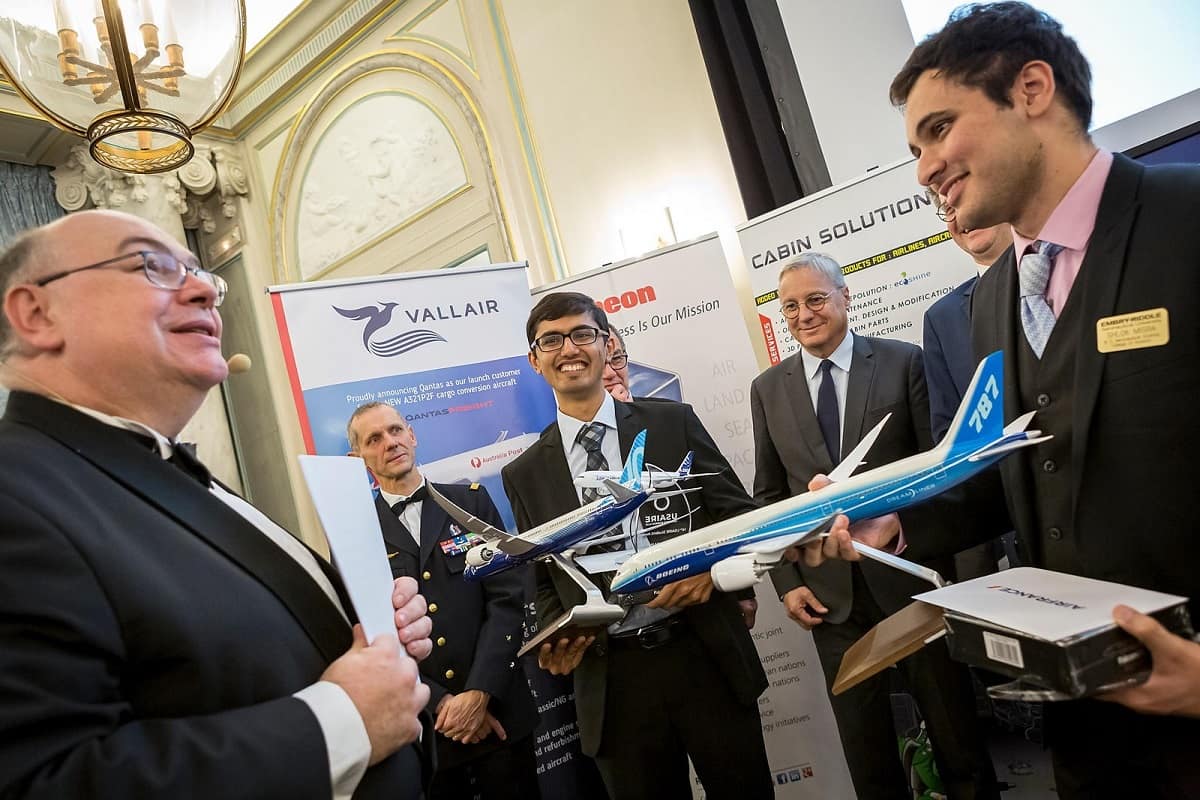 The prompt for the 14th-annual Association of United States and European Aerospace Industries Representatives (USAIRE) Student Awards Program was challenging: Write a 10-page research paper to be reviewed by leading aerospace and aviation executives on “Protectionism in the Defense Aerospace Industry in a Multipolar World.”

For some students, the endeavor might have seemed well beyond their areas of study — but Shlok Misra, an Aeronautical Science major and Flight student at Embry-Riddle Aeronautical University, and his research partner, Tanish Jain, a University of California, San Diego electrical and computer engineering major, are not your typical undergraduates.

An honors student on track to receive both a bachelor’s and master’s degree in Aeronautical Science simultaneously in May, Misra’s goal after graduation is to become a commercial airline pilot, a field in which he is already certified. His curiosity and passion for understanding all aspects of the aviation industry, however, have led him well beyond the flight deck.

A research assistant in the College of Aviation, Misra has participated in internships at two airlines and is also proficient in aviation research, safety management and flight data systems. Additionally, he is helping to develop risk and threat assessments for the Federal Aviation Administration, involving aircraft security systems that control everything from air traffic management, communication and navigation systems to meteorological information.

“He thinks way outside the box of just being a pilot. It’s nice to be able to help a student that wants more and wants to share that knowledge,” said Michele Halleran, a professor of Aeronautical Science that has mentored Misra during his time at Embry-Riddle. “For example, he has begun publishing a student-led aviation periodical that brings up-to-date aviation and aerospace news to students who might not typically encounter the information in their classes or flight lessons.”

Jain’s coursework focuses on machine learning and controls, robotics and autonomous technologies. His goal is to leverage his engineering skills in the business world to pursue ideas that are practical and sustainable.

A six-month effort researching and writing a comparative analysis of two emerging military powers – India and Israel – and their defense capabilities, led Misra and Jain to be among only five students worldwide that were awarded top honors in the international student awards competition.

“The awards competition gave us the opportunity to use our technical and analytical skills to focus on a geopolitical topic related to the aerospace defense world,” said Jain. “That made our efforts and conclusions distinctive.”

In addition to winning scholarships, the two were flown to Paris in November to attend a USAIRE gala event and present their paper to industry and government leaders from around the world.

“We were fortunate to gather insights into our subject by working with professors Halleran and Robert Owen, an expert on military history, regional conflicts and joint-service operations,” said Misra. “Going to Paris was a great opportunity to interact with leading industry executives and represent Embry-Riddle at a global platform.”

USAIRE includes representatives from over 100 American and European companies in the aviation, aerospace and defense industries whose objective is to foster international understanding and cooperation. The goal of the annual Student Awards Program is to identify talented university aeronautical and engineering students with the knowledge and leadership skills to become the next generation of administrators, disruptors and visionaries in the aviation and aerospace industry.