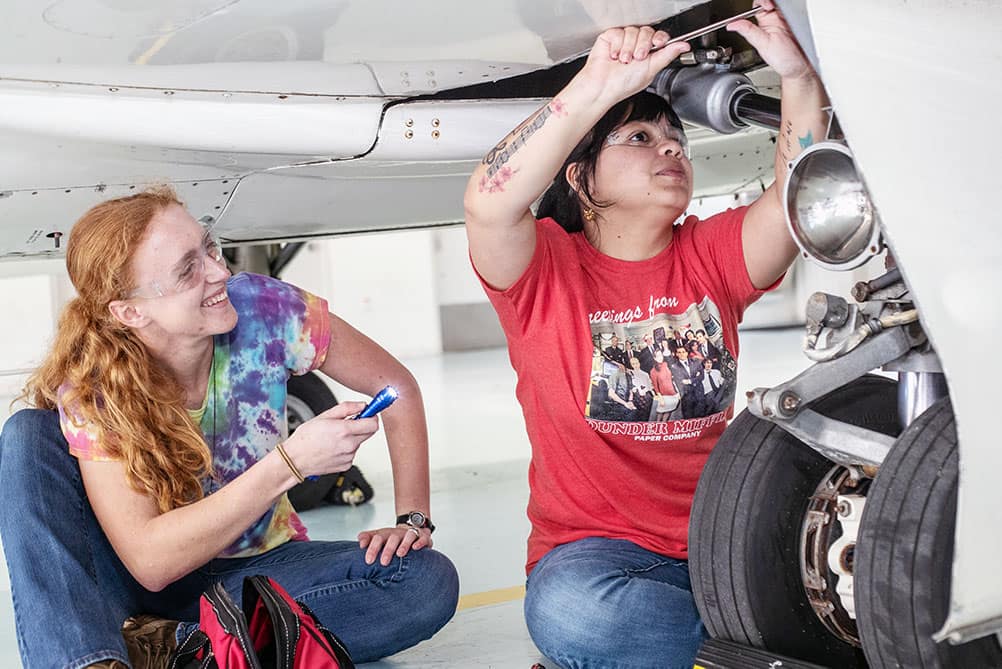 Michele Halleran (’04) recalled being one of a handful of female aerospace majors in college, but she didn’t waver in her determination to become a pilot.

“When I was in high school, I started flying and I used all my graduation money to get my private pilot’s license,” said Halleran, a professor of aeronautical science and the director of diversity initiatives for the College of Aviation.

Now, she is trying to encourage more women with aspirations of flight to follow their dreams. Before teaching, Halleran’s career included flying commercial airliners for Hawaiian Airlines and Lear jets for an air ambulance company.

“Given the pilot shortage that we’re facing, it’s critical that we tap into the entire potential talent pool and do a better job of recruiting more women into the pilot pipeline,” Halleran said.

The university is making efforts to recruit and retain more female and underrepresented minority students and faculty as a whole, but Halleran said her efforts are specifically focused on mentoring and supporting more women in aviation.

Embry-Riddle’s College of Aviation at the Daytona Beach Campus has the most students of the four colleges but the smallest percentage (15.5%) of female students. In the workforce, the total number of female pilots in the United States is just 6.7 percent.

People often assume women choose not to become pilots, because they want to have a family said Halleran. However, she said 79% of flight attendants are female and they fly more and work longer hours than pilots.

The College of Aviation has launched several initiatives to provide mentoring and other support to female students, including the Aeronautical Science Women’s Ambassador Mentoring program. 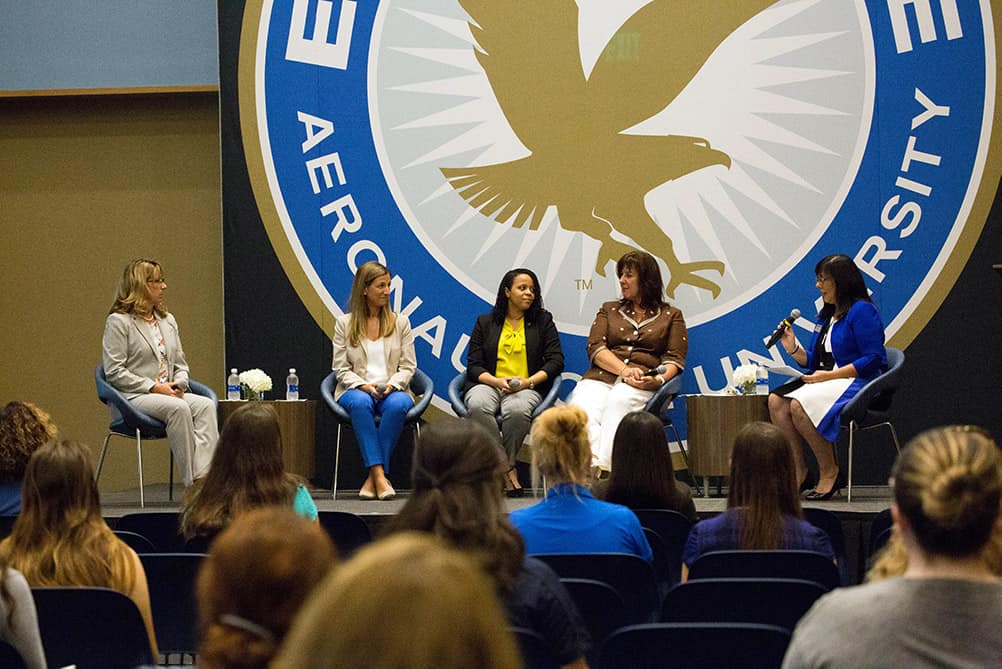 The university launched a Women’s Network, introduced with an Oct. 12, 2019 panel discussion during Homecoming.

”The college has recruitment and retention efforts, but it is our duty to encourage women to enter and stay in the aviation industry,” said Halleran. “We are very focused on student success.”

Five female students were hired in 2019 to be aeronautical science ambassadors, with each assigned to mentor a cohort of about 20 new female flight students.

“It is very empowering to have a room full of women talking about check-ride experiences, study tips and all things related to aviation,” said Brittney Porter, an aeronautical science student, who serves as an ambassador.

Another ambassador, Lindsay Cosby, agreed that support makes a difference.

“Before coming to Embry-Riddle, I was in contact with two fellow female aeronautical science students. I was extremely grateful for the advice and encouragement they gave me when I didn't know who else to ask my questions to,” she said. “Now, I am a mentor helping incoming aeronautical science females with transitioning to studying and flying at Embry-Riddle, just as I was helped before.”

Anna Wolff, an ambassador and treasurer of the campus’ Women in Aviation chapter, said the experience has been incredibly positive.

“Being able to welcome and encourage young women into a field of study, in which we are a very noticeable minority, is an incredibly rewarding experience,” said Wolff. “My goal has been to provide a space for freshman women majoring in aeronautical science to find inspiration in alumni and each other, and to encourage them to ask questions, share experiences, and overcome challenges as they pursue their passion for aviation — something we all share.”

“Recognizing that women are underrepresented in the aerospace and aviation industries, Embry-Riddle is taking the lead by launching a robust and holistic women’s initiative,” said Stephanie Kenyon, executive director of philanthropy for presidential and special initiatives.

The university’s program is a four-part approach to supporting females who seek a future as leaders in aviation and aerospace. Its four pillars are: youth programs, ambassador/mentorship program, the Embry-Riddle Women’s Giving Circle, and the Women’s Alumnae Network.

A university-wide Women’s Giving Circle aims to raise funds for scholarships to support female students. The university also launched a Women’s Network, introduced with an Oct. 12, 2019 panel discussion during Homecoming, to help support scholarships and various campus women’s organizations in aviation and other STEM fields.

“Fortunately, more and more women are taking an interest in and succeeding at aviation,” Halleran said.