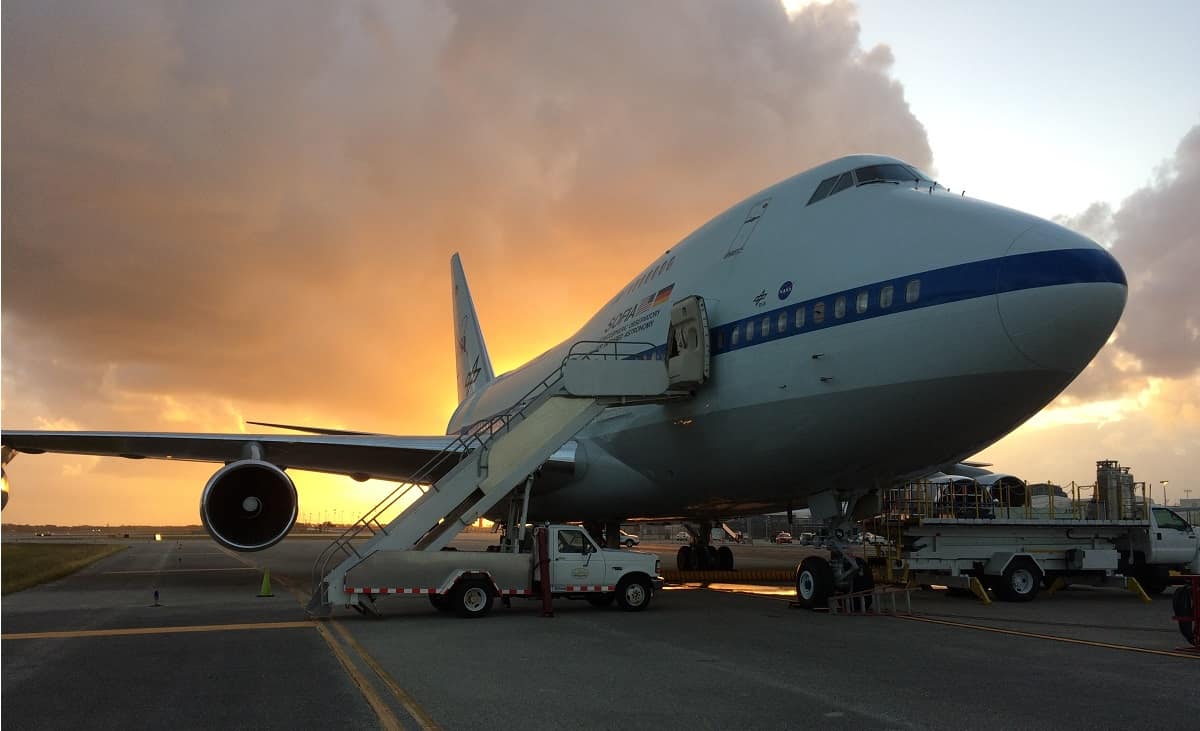 NASA’s Stratospheric Observatory for Infrared Astronomy (SOFIA) – a modified 747SP equipped with a 2.5-meter, 17-ton infrared telescope ​-- made a historic stop by Embry-Riddle and the Daytona Beach International Airport.

If the skies cleared, Bert Kallio, an Embry-Riddle Aeronautical University graduate student, knew he would have no more than two minutes to witness a rare celestial event.

It was a long shot, given the rain that had lashed Florida all day, but Kallio, with Embry-Riddle research assistant Cody Shaw and Tim Brothers of the Massachusetts Institute of Technology (MIT), drove a portable telescope west from Daytona Beach, Florida. By late afternoon, they had reached the Rosemary Hill Astronomical Observatory, near the University of Florida at Gainesville.

Like astronomers worldwide, they were racing to capture images of Triton, Neptune’s largest moon, as it blocked the light from a background star, tossing a shadow like an enormous, dark curtain across much of the Earth’s northern hemisphere. Embry-Riddle researchers and their colleagues at MIT, Williams College and Lowell Observatory were at the forefront of a global effort to document Triton’s eclipse or “occultation” of a star called UCAC4 410-143659.

Kallio, Shaw and Brothers scrambled to set up their instruments before sunset. “We were ready in time and it was clear,” Kallio recalls. But then came heartbreak: One last cloud rolled through. “We were hoping it would pass, but it didn’t.”

Embry-Riddle Stays in the Game

Fortunately, Embry-Riddle researchers were still in the occultation race, thanks to faculty member Terry Oswalt’s founding role in a scientific consortium called SARA – the Southeastern Association for Research in Astronomy. Oswalt, chair of the physical sciences department and a professor of engineering physics, called on key research partners within the SARA network to point another ground-based telescope at Triton – in particular, one located in the Canary Islands, off the northwestern coast of Africa.

At the same time, following a historic stop at Embry-Riddle and the Daytona Beach International Airport, NASA’s Stratospheric Observatory for Infrared Astronomy (SOFIA) – a modified 747SP equipped with a 2.5-meter, 17-ton infrared telescope – zoomed toward the centerline of Triton’s shadow, as part of the aircraft’s first scientific mission to be flown over the Atlantic Ocean.

Aboard SOFIA was Embry-Riddle collaborator Michael J. Person, a research scientist at MIT and director of the Wallace Astrophysical Observatory.

Inside Embry-Riddle’s observatory, graduate student Margaret Gallant was operating the university’s research-grade, 1-meter telescope. To precisely align it with Triton, she took cues from Associate Professor of Physics and Astronomy Ted von Hippel as well as Jay Pasachoff, the Field Memorial Professor of Astronomy at Williams College, and his team (student Christian Lockwood and former student Allen Davis).

Von Hippel had opened the observatory’s lower shutter, leaving the upper hatch closed to keep the telescope dry. Gallant aimed the instrument at the horizon.

“It was drizzling,” she says. “They were telling me, `Go north – more north.’ So despite the rain, I pointed the telescope until enough GPS satellites were in sight to get timing and location data.”

Pasachoff had equipped Embry-Riddle’s telescope with an ultra-high-speed camera, called a Portable Occultation, Eclipse and Transit System (POETS), which captures an image every three seconds. Linked with GPS data, it could provide details about Triton’s tenuous nitrogen atmosphere as well as clues to its mysteriously wrinkled surface. A moon larger than Pluto, Triton appears to be covered in a mix of nitrogen, water and carbon dioxide ices, sculpted by wind and cryogeysers spewing liquid nitrogen.

“During an occultation,” Oswalt explains, “the way the background star dims is a sensitive probe of the density and composition of the foreground object’s atmosphere. It can also give us very sensitive measurements of Triton’s size and shape.” Researchers also wanted to know how Triton’s climate had changed since its last documented occultation in 2001.

But the clouds wouldn’t budge. “There was a moment when we realized it was over,” Gallant says. “That was disappointing, but it was a great experience overall. I operated a meter-class telescope and I worked with an amazing team of researchers from other schools.”

West of Morocco, atop a volcanic mountain on the island of La Palma, the sky was cloud-free and vivid with stars: a perfect, clear night, says researcher Javier Licandro of the Instituto de Astrofísica de Canarias, a member of the SARA network.

But a missing adapter meant collaborator Stephen Levine, an astronomer and Discovery Channel Telescope scientist with the Lowell Observatory, couldn’t get his high-speed camera properly attached to the La Palma telescope. He engineered a last-minute solution and hoped for the best.

After that, all Licandro and Levine could do was sit and watch. As Triton appeared to merge with the background star, it became increasingly faint, and after about two minutes, it brightened again. “Yes, yes, yes!” Licandro recalls saying.

Levine and Licandro didn’t see the “central flash” – a burst of light at the shadow’s centerline when the foreground object’s atmosphere bends and magnifies the background starlight in an observer’s direction.

“When the background star’s light started to fade,” Person says, “there was a big cheer, and then when the light came up again, there was excitement and chatter, followed by more cheering when we had the central flash.”

What happens next? “It was three minutes of data-gathering,” Levine says. “Now we’re looking at three to six months of analysis.”

In other astronomy news that generated global headlines, Embry-Riddle’s Terry Oswalt provided an invited review to the journal Science on research that confirmed a phenomenon called “gravitational microlensing.”

Whenever light from a distant star passes a foreground object, Albert Einstein predicted, gravity should bend and brighten the starlight, similar to the way a lens focuses light. In his June 9 Science article, Oswalt wrote that Kailash C. Sahu’s research “provides a new tool for determining the masses of objects” that are otherwise difficult to measure.

Gravitational microlensing by a star forms a perfectly circular ring of light – a so-called “Einstein ring.”

Sahu’s group observed a more common scenario: Two objects that were slightly out of alignment, forming an asymmetrical version of an Einstein ring. “The ring and its brightening were too small to be measured, but its asymmetry caused the distant star to appear off-center from its true position,” Oswalt explains. “Sahu’s team was the first to observe this `astrometric lensing’ in a star other than the Sun.”