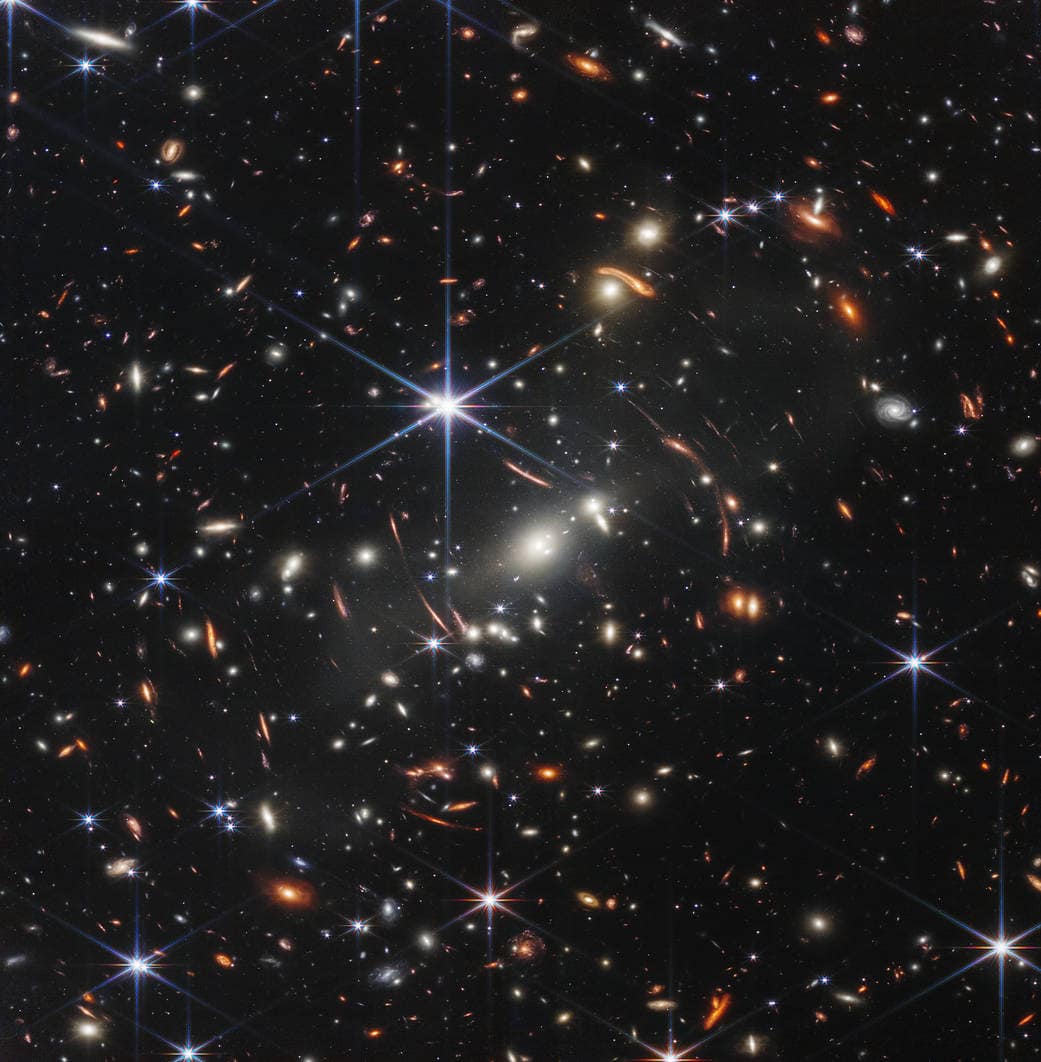 The recent release of never-before-seen imagery from the James Webb Space Telescope — which featured glimpses of colliding galaxies and nebulas up to 13 billion light years away — was a huge deal. The photos were the sharpest ever recorded in human history. And you couldn’t miss them: They ran in seemingly every news publication around the world, in all of their full-color glory.

Still, even as you admired those shots of deep space, and even if they put you in a state of awe, you might have also been wondering — “What am I actually looking at?”

Dr. Terry Oswalt, associate dean for research and professor in Embry-Riddle Aeronautical University’s College of Arts and Sciences, is here to help. He’s an astronomer, but he says that you don’t have to be one, too, in order to appreciate the science contained in these images.

“Humans have always wondered about our place in the cosmos, whether we are alone and what’s out there,” he said. “Personally, that visceral sense of wonder is what attracted me to astronomy as a kid.”

As a scientist, he wants to understand how life and its endless array of moving parts work together and evolve over time. As a person, though, he just wants to be wowed like anyone else. These images, he says, satisfy both of those cravings.

After all, the photos captured thousands of galaxies as well as black holes so massive that references to their size lose all meaning when described to scale (one is 24 million times the mass of our sun, for instance). But here’s the thing: What we see in these shots is a just tiny, near-microscopic piece of the Southern Hemisphere sky — equal to a single grain of sand, if you held that grain between your fingers and stretched your arm out toward the stars.

“Images like these are far more interesting to me than the latest blockbuster movie,” Oswalt said. “Astronomy is a visual science, and a picture is worth more than a thousand words.”

Specs of Dust: A Breakdown

Although Oswalt notes that the first few of the images released by the James Webb Space Telescope are of already well-studied objects, the higher quality of the shots, thanks to the telescope’s infrared technology and size, offer more detailed pictures than ever before. The more we can see, the more we can learn.

“Apart from the ‘wow’ factor, taxpayers deserve to know what NASA does with their money,” Oswalt said. “And the stream of images and findings that this program is beginning to provide will offer some much-needed perspective on how science works and why the public should trust the scientific methods we use.”

A breakdown of each of the first five photos released is below.

“The huge mass of this cluster, which is about 4.6 billion light years away, focuses and magnifies the light of far more distant galaxies behind it that could not be seen otherwise — all those orange- and reddish-smeared blobs,” he said. “Some of those background objects are about 13 billion light years away — almost at the earliest stage, when galaxies first began to form after the big bang.”

That’s one of the main goals of the James Webb Space Telescope: to image the first generation of galaxies and help us understand how the universe formed. (Side note: The reddest and faintest galaxies pictured are the farthest away.)

“The sharp whitish points with eight spikes that are sprinkled sparsely around this image — the brightest is near the center — are stars here in our Milky Way galaxy,” Oswalt added. “We are looking through our own ‘back door screen’ at the distant universe!” 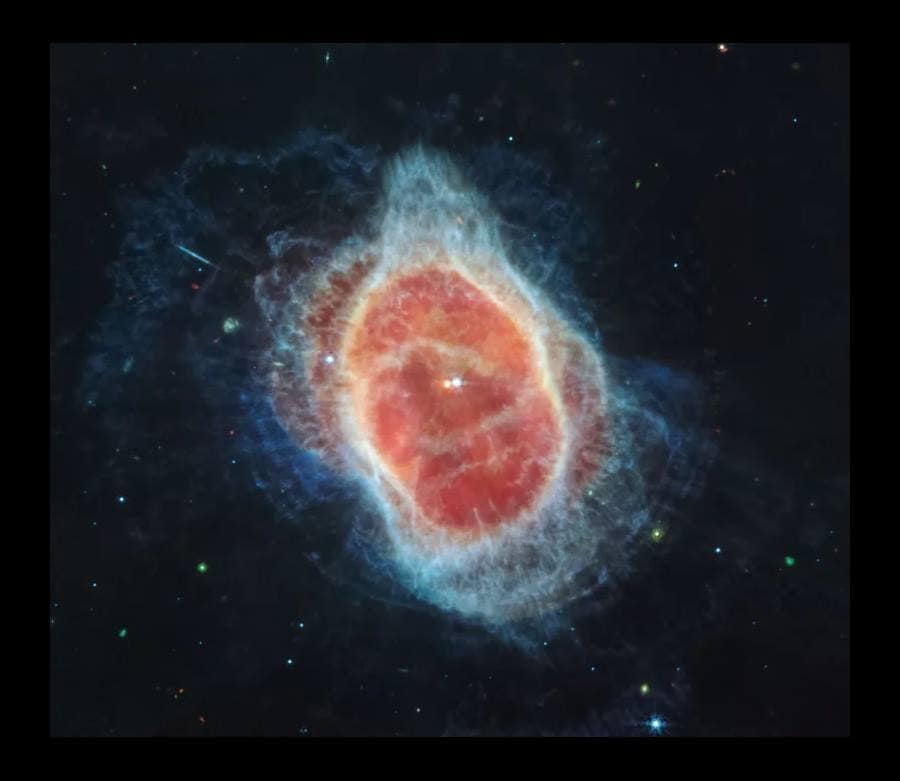 According to Oswalt, this image offers a glimpse into the future.

“In a billion years or so, the sun will begin ballooning up into a red giant, losing its atmosphere and probably engulfing the inner planets, maybe even the Earth,” he said. “The expansion will continue until the material is so spread out it becomes partly transparent, glowing by the light emitted by the chemical elements in the gas until the tiny, hot, bluish-white core of the sun becomes visible.”

There’s one key difference here compared to our sun, however.

“As you can see, at the center of this image are two stars — they are orbiting each other,” Oswalt added. “One of them — the blueish one — is the one that has lost its envelope. Eventually, all that is left will be the hot dim core, called a white dwarf star.” 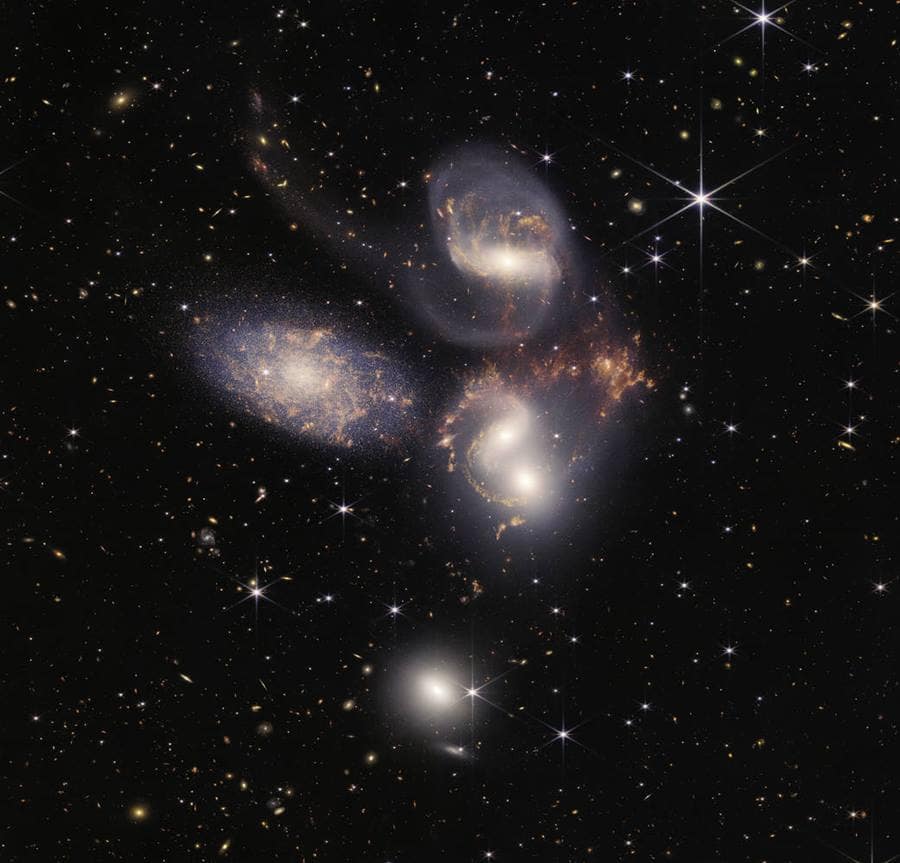 “Here is a cosmic train wreck in progress,” Oswalt said. “Five galaxies are crashing into each other. This stimulates furious star formation. That, and gravity’s tidal effects, distorts the symmetry of the original spiral structure of each galaxy.”

In about a billion years, at least some parts of this system will merge into one giant elliptical galaxy.

“The rest of the galaxies’ material will be flung off into space,” he added. “You can see that two of these galaxies are already in the process of merging.” 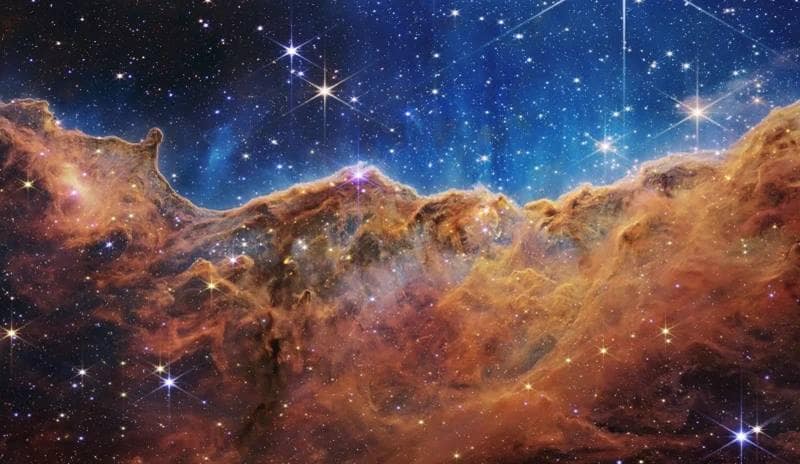 “This is a vast ‘stellar nursery’ where many thousands of stars and their planetary systems are forming right now,” Oswalt said.

Think of the James Webb Space Telescope as something like an MRI or sonogram imager. It can see “through” objects that visible light cannot penetrate, allowing astronomers to study how stars and their systems form.

“The glowing gas and opaque dust hides proto-stars at optical wavelengths,” he said. In other words: These proto-stars would impossible to capture by a normal telescope — but the James Webb device can “see” their heat. 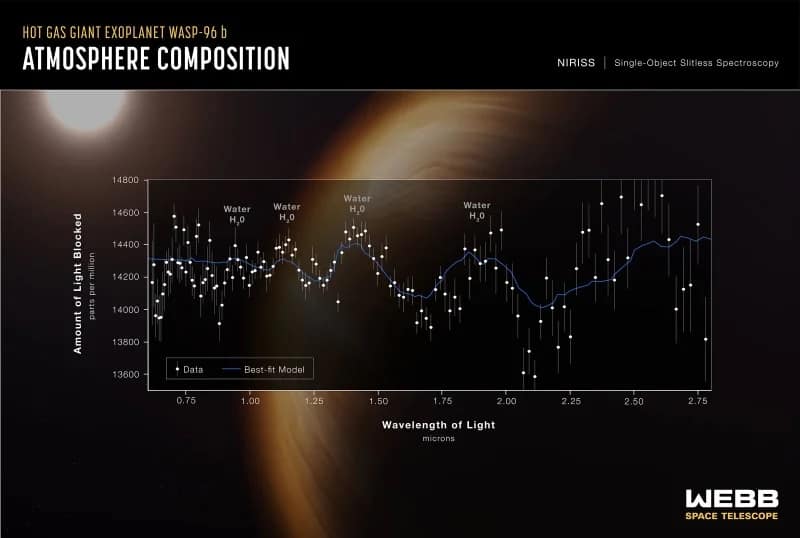 A graph may not be as exciting to look at as distant constellations, but this spectrum maps one of the first exoplanets discovered to transit its host star — and it hints at even grander discoveries.

“The peaks in this spectrum show that the planet’s atmosphere has water, which is one of the key requirements for life as we know it,” Oswalt said. “However, WASP-96b surely isn’t much like Earth. It is a planet about half the mass of Jupiter and it orbits its star in only about 3.4 days. It’s what astronomers call a ‘hot Jupiter,’ and that water is actually steam. Not a likely place for life, but this spectrum demonstrates one of the key goals of the James Webb Space Telescope: to obtain spectra for as many exoplanets as possible, and to identify as many that are Earth-like in the habitable zone around their host stars.”

Embry-Riddle’s Daytona Beach Campus is home to the largest university research telescope in the southeastern United States. Its Bachelor of Science in Astronomy and Astrophysics program has produced more graduates than 85% of other undergraduate astronomy programs in the country.