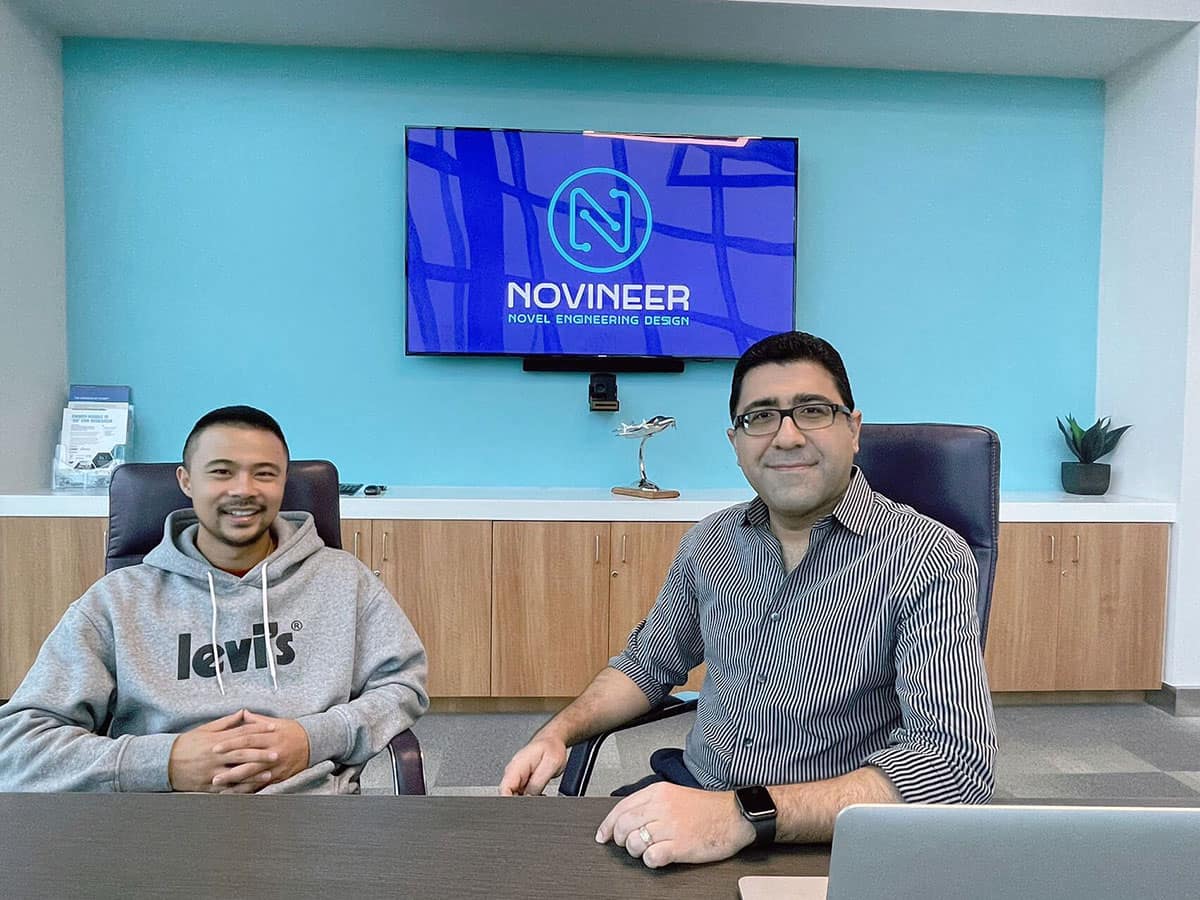 Dr. Zhichao Wang and Dr. Ali Tamijani are the chief technology officer and chief executive officer, respectively, of the Novineer company, which was founded on research they conducted together at Embry-Riddle. (Photo: Novineer)

Novineer is poised to advance aviation, space exploration, manufacturing and the global 3D printing market, which reported $10.6 billion in revenue in 2021 and is expected to grow to more than $50 billion by 2030, according to the market research firm SmarTech Analysis.

The company’s big idea — the brainchild of Embry-Riddle faculty member Dr. Ali Tamijani — could accelerate the widespread use of 3D printing in the manufacture of a wide range of end-use parts and products. That seismic shift would advance the 3D printing industry, reduce production cost and time, and open the door to new business enterprise, said Tamijani, professor of Aerospace Engineering.

How does it work? Novineer design and simulation software can simplify and accelerate the process of designing, modeling and fabricating high-performance 3D-printed parts, Tamijani explained. Using the technology, a design that might take four days to complete using current methods could be accomplished in no more than four hours with Novineer’s software, for example. The company was born out of three research projects: multi-metal 3D printing for NASA, composite 3D printing technology for the U.S. Navy and what is known as latticework for the National Science Foundation. The variety of projects reflects the diverse ways in which 3D printing can be used, each of which requires an optimized design for the application — which is where Novineer comes in, Tamijani said.

Right from the start, Tamijani and his team have been on a winning streak. The winner of both a 2019 National Science Foundation Early Career Award and the U.S. Air Force Office of Scientific Research Young Investigators Research Program Award in 2017, Tamijani has also been recognized as the University’s (2020) and College of Engineering’s (2019) Outstanding Researcher of the Year. “These awards are a testament to the hard work and dedication of our research team,” he said.

Tamijani and his company recently won an investment of $50,000 from StarterStudio, a nonprofit tech startup accelerator with which Embry-Riddle has partnered. The August 2022 grant was the largest initial investment that StarterStudio has ever made from the Volusia County Seed Fund. In October, the company won second place and an additional $30,000 in the Florida Venture Forum Early-Stage Capital Conference. The company leaders have signed an option agreement for two patent applications with Embry-Riddle.

Tamijani founded the company about eight months ago with his former Ph.D. student Dr. Zhichao Wang, who is now a postdoctoral fellow and the company's chief technical officer. Working on related 3D printing design technologies are three Ph.D. students, one master's student and an undergraduate in Tamijani’s research group.

Wang said participating in an NSF program known as i-CORPS helped transition the company from an academic project to a viable business. He said the program, which sets up interviews between engineers, business developers and prospective customers in different industries, was really valuable because it allowed him to see what customers need.

“Before, we were thinking like engineers and scientists, focused on our invention and technology,” Wang said. “But business people are thinking, 'I have a problem. I don't care what your method is.' We made contacts and learned how to focus on the customers' needs and the values we deliver to them.”

Tamijani also credits the Embry-Riddle Center for Innovation and Entrepreneurship for helping Novineer get off to a running start. The company participated in the center's startup accelerator program, which is run in partnership with the Embry-Riddle Research Park. The program positioned Novineer to compete successfully in the StarterStudio Seed Program and the Florida Venture Forum Early-Stage Conference, after which the company was moved to the MicaPlex facility in Embry-Riddle's Research Park, joining the MicaPlex Technology Business Incubator. At the MicaPlex, Novineer's founders work with their pilot customers and further develop their design technology.

“Prior to our working with Dr. Tamijani," said Ramy Rahimi, acting director of the Center for Innovation and Entrepreneurship and assistant professor in the David B. O'Maley College of Business, "Novineer had successfully developed and transitioned a technology from an invention to an innovation. Developing a business model, go-to-market strategy and a means of fundraising were natural next steps. By joining the Build Stage Accelerator Program, in partnership with MicaPlex, Dr. Tamijani and Novineer received business resources, guidance and mentorship.”

“The center and MicaPlex Incubator are a great support for researchers at Embry-Riddle because they can help a startup like Novineer move faster to the next stage,” Tamijani said.

Dr. Stephanie Miller, executive director of technology transfer and research park initiatives at Embry-Riddle, called Novineer “a great example of a commercialization pathway that the university strives to support. Its cutting-edge laboratory research spun out into a startup that has quickly gained traction in its target market and garnered investor interest.”

Since 2017, 163 jobs paying an average annual salary of $75,000 have been created as a result of entrepreneurship and innovation at Embry-Riddle’s Research Park. Some 25 affiliated companies have raised $101 million from grants and investors. They have also provided employment for 210 student interns.

*Michaela Jarvis contributed to this report.