Aviation Maintenance: 'As Important as Pilots’ 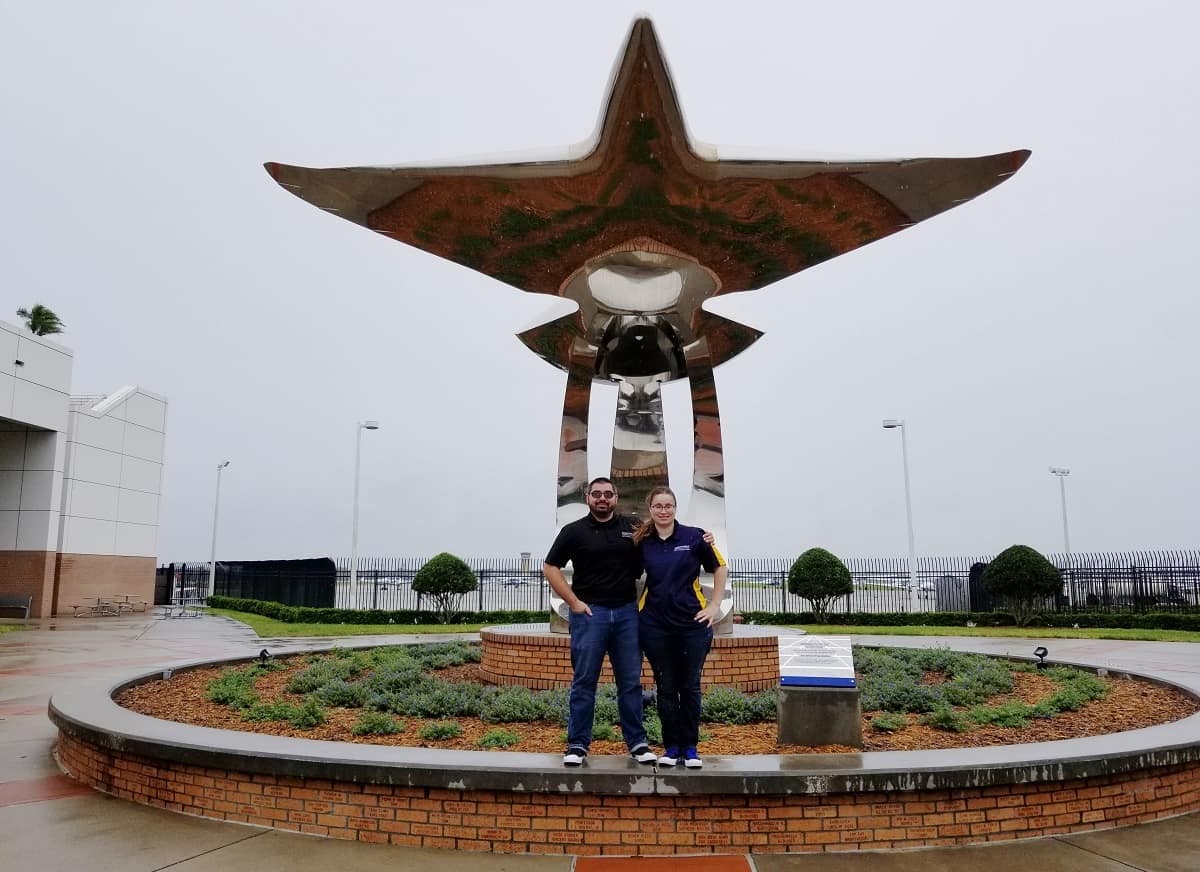 Before graduating from Embry-Riddle with degrees in aviation maintenance science, Reinardo "Rey" De Jesus Jr. and Abbey Brown found good jobs and each other.​

Brown works on F/A-18 Super Hornet aircraft for a Boeing contractor at Naval Air Station Cecil Field in Jacksonville, Fla. Currently, De Jesus serves as a part-time aircraft engine technician in Embry-Riddle’s engine repair station on the Daytona Beach Campus. His ultimate goal is to secure a position with the Naval Air Systems Command in Jacksonville.

The couple’s swift transition into the workforce reflects the value of an Embry-Riddle degree in aviation maintenance science as well as the high demand for qualified technicians. Over the next two decades, Boeing has estimated that nearly 120,000 new commercial airlines maintenance technicians will be needed in North America alone. Worldwide, the need will reach 648,000 by 2036, Boeing reported.

“Companies are in need of people with our specific skills,” De Jesus said. “I knew we were in demand, but as I continued my education with Embry-Riddle, I realized – wow – they really do need us. We’re just as important as pilots.”

Elevating the status of aviation maintenance technicians will be imperative in light of the looming shortage of these professionals, said Chuck Horning, chair of Embry-Riddle’s Department of Aviation Maintenance Science (AMS). For too long, he recently told Flying magazine, the field has widely been seen as a “blue collar” profession, but that perception is outdated and incorrect.

“Today’s aircraft include some of the most advanced and complicated technology in the world,” said Horning, who is himself a graduate of Embry-Riddle’s AMS program. “Maintaining and troubleshooting modern aircraft requires professionals with an understanding of computers, electrical systems, mathematics and physics as well as a high level of problem-solving skills.”

In fact, said AMS faculty member Roger Sonnenfeld, aviation maintenance professionals are called Aircraft Maintenance Engineers – not technicians – in most other parts of the world. “Our students receive significant hands-on experience working with actual airworthy equipment, while working as non-certificated employees within our Federal Aviation Administration (FAA) Part 145 engine repair station during their last semester,” explained Sonnenfeld, who joined Embry-Riddle 35 years ago. “I really enjoy seeing people like Ray and Abbey come out of our program and enter the field because I know they’re as well-prepared as they could possibly be.”

De Jesus said he had “never left New Jersey” before he arrived at Embry-Riddle, where he promptly met people from all over the world. An avid high school athlete, he originally considered becoming a pilot, but he soon learned that flying at night was not for him. During his second semester, he began taking aviation maintenance courses. “Finally,” he recalled, “I had found something that I was truly passionate about, so I continued.”

In Embry-Riddle’s repair station, De Jesus said he particularly enjoys working with other professionals from many different places – from Africa and Costa Rica to Florida. “Respect is the feature that runs throughout the aviation maintenance program at Embry-Riddle,” he said. “If you respect each other, you can work with anybody. Working here has really boosted my confidence in being able to communicate effectively with people to get the job done.”

The AMS program “is incredibly rigorous,” said Brown, a native of Columbia, Md., who chose Embry-Riddle because it has a women’s golf team. “You’re going to know what you’re doing after you make it through that program.”

Brown’s current position involves working with a horizontal stabilizer component of the F/A-18 Super Hornet, a maritime strike attack aircraft. “I repair it and make sure there’s no corrosion,” she explained. “It might be a sealant job one day, or a composite repair, sanding or drilling – anything that has to be done.”

She earned her A&P certification and enjoyed hands-on learning opportunities at Embry-Riddle. Often, she attended classes with only one other female student, but she kept going.

“If you’re one of only a few women in your field, you can’t be intimidated by that. Aviation is growing and it’s more open than ever. Have fun and remember there’s so much opportunity out there.”