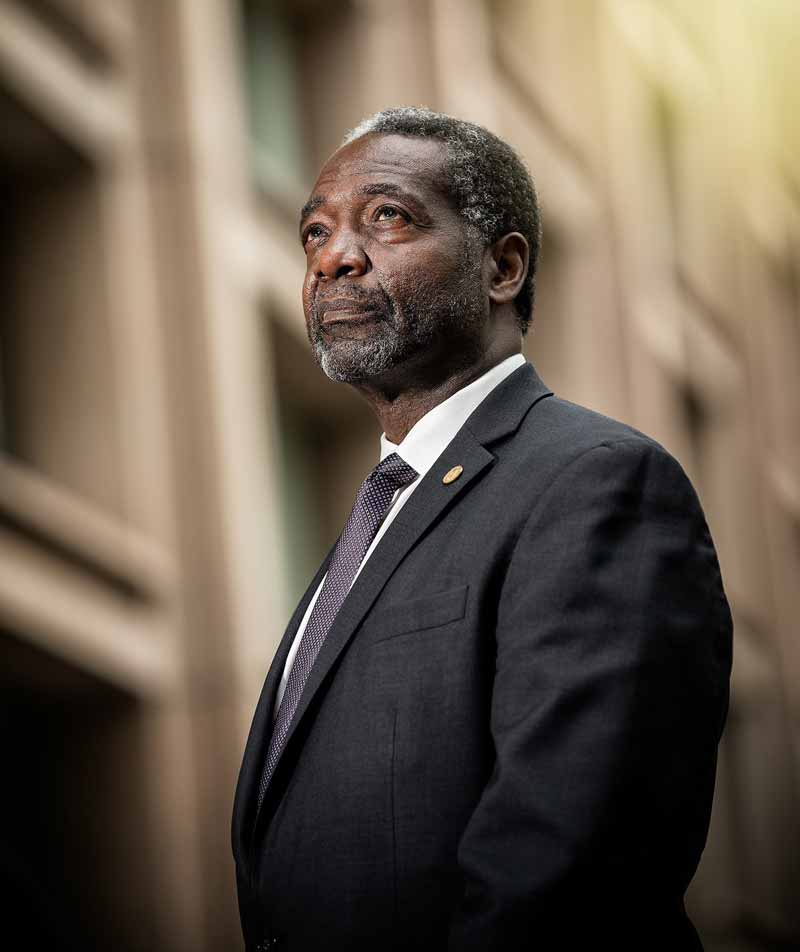 Dennis Jones, managing director of the National Transportation Safety Board and a graduate of Embry-Riddle, keeps his eyes on the skies. Photo: Howard Korn/Embry-Riddle

It’s 10:30 a.m. on a Friday and Embry-Riddle graduate Dennis Jones, now the managing director of the National Transportation Safety Board (NTSB), has already put in half a day’s work, having clocked in before most people have gotten out of bed. There’s a small crowd gathered outside his office, waiting for him to wrap up our phone conversation so he can get back to the day-to-day operations of the NTSB.

Most days, that translates to interfacing with Congress and NTSB board members, meeting with staff and working with the Coast Guard, Federal Highway Administration and Federal Railroad Administration. “There’s never a dull moment,” Jones says. “I have a very fulfilling job, and as long as my days are, they go by quick.”

Getting Up in the Air

As a kid growing up on Long Island, Jones always had his eyes on the sky. He would sit in his backyard watching airplanes from a nearby airport fly overhead, dreaming of someday being behind the controls. Money was tight, so Jones washed planes and cut grass at the airport in exchange for flying lessons.

His first lesson, at the controls of a Cessna 150, was his first time on a plane, period. To complicate matters, he was scared of heights. But once in the sky, his fears faded away. He got his pilot’s certificate at the age of 17 and began taking solo flights to airports throughout the Northeast, where he was often greeted with a mix of curiosity and surprise. “I got a lot of attention,” he says. “Back then, it was rare to see African-American folks flying.”

Around that time, a magazine advertisement for Embry-Riddle caught his eye. He applied and was accepted, working all summer to save up the money to attend. He flipped through the course catalog and picked the first course his finger landed on — aviation maintenance.

The program required an airframe and powerplant maintenance certificate, so he worked on his A&P license in the morning and took core academic classes at night. “The A&P was fascinating,” Jones says. “Prior to that, I didn’t think I was mechanically inclined. I knew how to fly a plane, but I didn’t know what was going on beneath me.”

Jones began his NTSB career as an intern in 1979 and was hired on full-time as a field-investigator trainee in 1980. His first major investigation was the August 1987 crash of Northwest Airlines Flight 255 out of Detroit, which killed everyone on board except one little girl.

“I was always concerned about how I was going to respond to the scenes and the victims of crashes,” Jones says. “That aspect of the job was very surreal. During that trainee period, I realized I could handle it.” All told, Jones has investigated approximately 1,300 aviation accidents in his nearly 40-year career.

In the late 1990s, Jones began traveling to Africa to investigate plane crashes. During that time, he kept hearing about Safe Skies for Africa, a Department of Transportation (DOT) initiative focused on bringing the continent’s aviation safety and security practices up to accepted world standards.

Jones’ work was a natural fit, so an interagency agreement between the NTSB and DOT was formed. Jones found himself not just leading accident investigations, but also helping African countries launch and improve their investigation programs, implementing safety procedures and providing on-the-job training. His work in Africa propelled him onto the international stage, giving him the opportunity to conduct safety workshops in Sudan, Singapore, Iraq and Russia. “Working with folks in that part of the world has been fulfilling,” Jones says.

Piloting the NTSB into the Future

In January 2017, Jones was called back to Washington to serve as the NTSB’s acting managing director, with the assumption that he would remain for a few months then return to his work abroad. But at the request of then-acting NTSB Chairman Robert Sumwalt (’14), Jones accepted the full-time position and was confirmed in September 2017, becoming the agency’s first African-American managing director.

“Dennis has street cred,” Sumwalt says. “He’s done the job, he’s been an investigator. He’s got the piloting knowledge, the technical knowledge, the intellect and, most importantly, the people skills.”

Jones will need to call upon those skills as he helps the NTSB navigate a rapidly changing transportation landscape, with autonomous vehicles, new recording technologies, solar-powered planes and hyperspeed rail all becoming increasingly prevalent. And as ever, Jones will be looking to the skies. “A lot of these emergent technologies have been present in planes, so what I learned in aviation is now applying to other modes of transportation.”

Jones has investigated dozens of headline-making international plane crashes, but perhaps the most mysterious is Malaysia Airlines Flight 370, which disappeared on March 8, 2014, while flying from Kuala Lumpur, Malaysia to Beijing, China, with 239 people aboard.

Serving as a U.S. accredited representative, Jones and a team of U.S. investigators traveled to Malaysia to assist with the multinational search. “This was not my first time dealing with a missing plane,” Jones says. “But this was certainly the first of this magnitude. We had in mind that it would be found by the time we got there but that didn’t manifest.”

The team worked in Malaysia for nearly two months. When it became obvious the plane would not be found, they returned to the United States and continued to assist remotely. “I’ve been to the scenes of a whole lot of crashes all over the world,” Jones says. “But this was a very odd case. There was no crash site. It’s the first of its kind involving a commercial airliner and everything was different.”

To date, the aircraft has not been recovered, though several pieces of debris have been found. The governments of Malaysia, China and Australia called off the nearly three-year official search in January 2017. It was the largest and most expensive search operation in aviation history, costing approximately $160 million.

In January 2018, the Malaysian government announced that it had sanctioned a new search by Ocean Infinity, a private American underwater technology company. In May, the company's search officially concluded, with no sign of the aircraft.