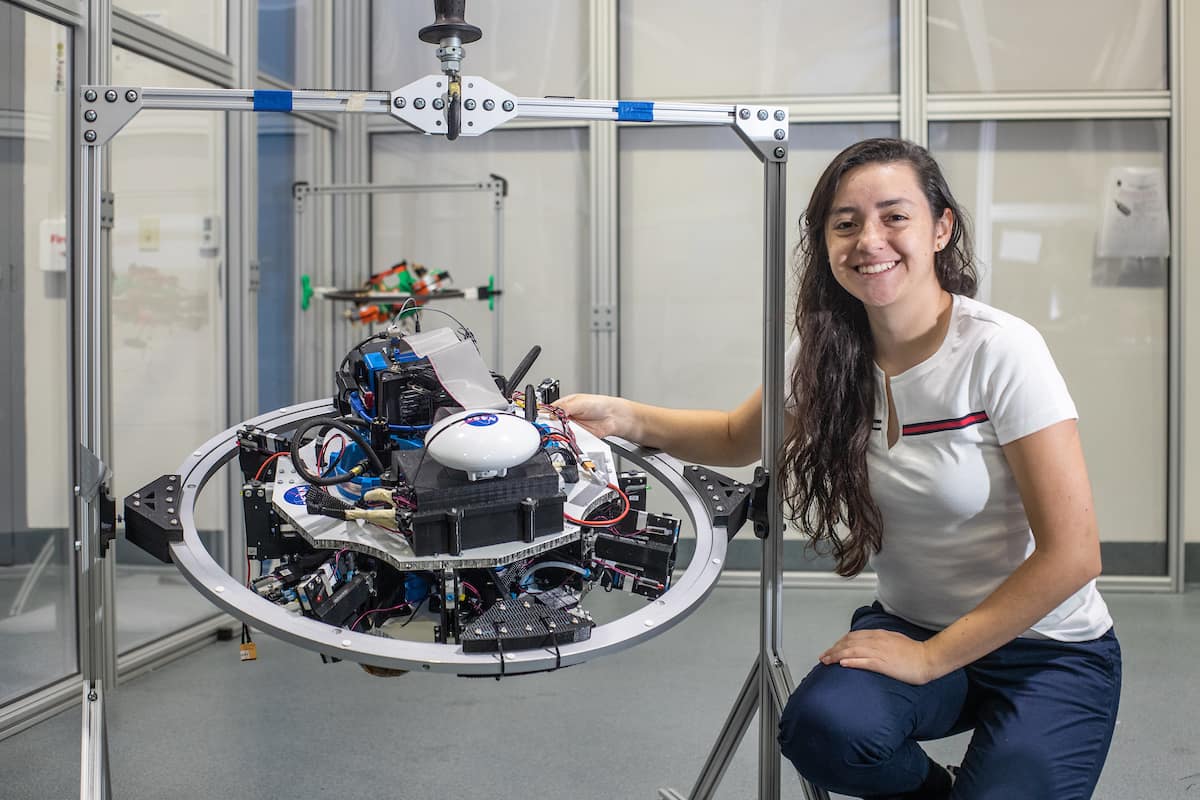 Poking around under the hood is in Yomary Betancur Vesga’s comfort zone. As an Embry-Riddle Aeronautical University graduate student, she handled all of her own car maintenance herself — a budgetary necessity, she said. Now as a young engineer, newly hired by Collins Aerospace, she is applying her skills far beyond her home garage — namely, in designing a vehicle that can withstand the rigors of space exploration. Her work has required her to create 3-D printed parts, integrate hardware and software, develop algorithms, and then, test, verify and validate her work, all as a part of a project funded by NASA.

Working in the Advanced Dynamic and Control Lab at the John Mica Engineering and Aerospace Innovation Complex (“MicaPlex”), in Embry-Riddle’s Research Park, she has been developing and implementing guidance, navigation and control systems for a six-degree-of-freedom spacecraft. The craft, complete with a camera and drill system, will have the ability to “jump” onto asteroids to collect samples.

Betancur Vesga worked under the mentorship of Dr. Hever Moncayo, associate professor of Aerospace Engineering with expertise in flight dynamics, control, guidance and navigation, with whom she co-authored a paper for the Journal of Aerospace Information Systems. In the lab, Betancur Vesga was responsible for integrating hardware and software for an Extreme Access System (EASY) spacecraft and testing with a device called an Integrated Gravity Offloading Robotic System (IGOR), which is a piece of large equipment cabled to the ceiling, similar to the machinery that moves automobiles through a factory line during manufacturing. This testing apparatus enabled her to subject the test vehicle to high fidelity, partial-gravity simulations.

“We have tried to create a very high-fidelity model. We created components with our 3-D printers using a (kind of plastic), which reduces manufacturing time and cost,” said Betancur Vesga. “After we printed the parts, it was like playing with Lego®, assembling the parts.”

The entire system weighs about 52 pounds. For this phase, weight is not critical, but size matters because these vehicles are being built to explore asteroids with very low gravity as well as areas where a normal rover could not reach. One of the more creative improvisations is the use of compressed air tanks meant for paintball guns to store the fuel used by 24 thrusters, a solution Dr. Moncayo developed on another NASA project.

“Based on what we can demonstrate, we hope to get investors to back a design with a tank that can contain more fuel and more compressed air,” Betancur Vesga said. “Right now, we can do one minute of testing and then we have to take out the tank, charge it and come back.”

In designing a vehicle that allows the test of the control system, the actuators have to be perfect.

“We had to come up with a workable propulsion system and alignment is important, just as it is in a rocket. Each of the small thrusters must be perfectly placed because misalignment angles force you to use more energy when the vehicle compensates during a maneuver,” said Betancur Vesga.

Some misalignment, though, is unavoidable, even in precise manufacturing.

“I have to consider the thrust I get from each of the thrusters and how we compensate for undesired dynamics,” Betancur Vesga added. “That’s critical to protecting the vehicle during exploration missions.”

Her work also addressed the challenge of developing control algorithms so that even if a thruster, actuator or sensor fails, the vehicle can compensate by executing hopping and jumping maneuvers to stabilize the system.

Betancur Vesga was born in Bogota, Colombia, where she earned her Bachelor of Aeronautical Engineering from San Buenaventura University in 2015. In Colombia, she interned as a safety analyst in the operations safety department of Avianca Holdings, S.A. Even though she was part of a “family of lawyers,” her father worked with members of the U.S. Air Force on cases and, in turn, she developed an early interest in aerospace. As an undergraduate, she designed experimental rockets and investigated airflow at different accelerations as an undergraduate.

Knowing that she wanted to work for NASA, Betancur Vesga set her sights on studying in the U.S. “Everyone knows Embry-Riddle,” she said. She was admitted to the Master of Science in Aerospace Engineering program in 2017. The intensive English program offered by the Embry-Riddle Language Institute helped her quickly gain the language proficiency she needed to work in the U.S. aerospace industry.

Through an eight-month co-op position with Collins Aerospace, Betancur Vesga worked on Traffic Alert and Collision Avoidance Systems (TCAS). She will be continuing her work as a Collins Aerospace engineer. When she becomes a U.S. citizen, she plans to transition to space-focused projects at Collins but says her safety work “is related, because you have to develop algorithms, implement, test, validate and verify.”

Betancur Vesga is not leaving her lab at the MicaPlex in the rearview mirror. She will continue her studies with Embry-Riddle as a doctoral student.