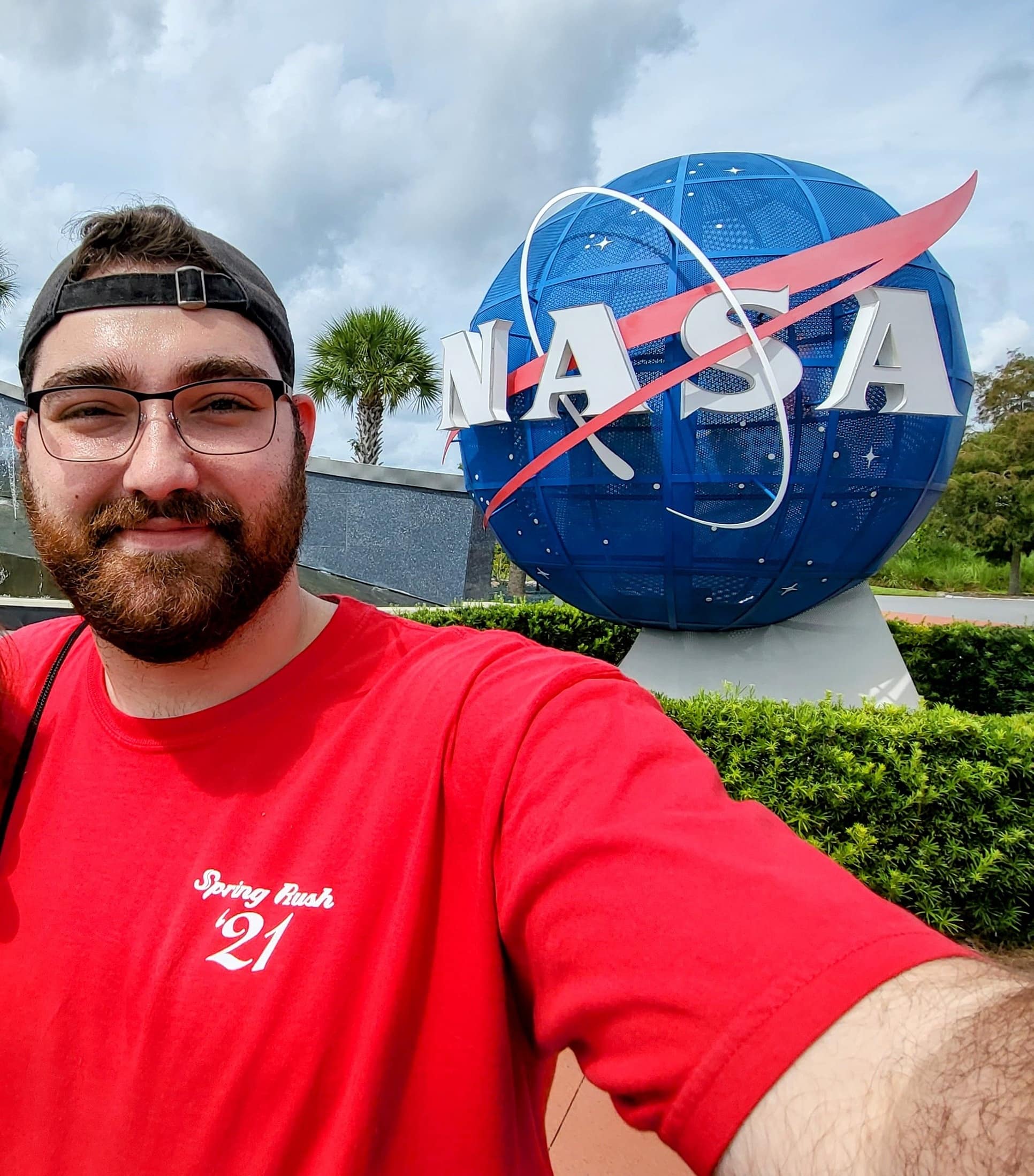 My name is Miland Myers and I'm currently a super senior in Aerospace Engineering with concentration in Astronautics and a minor in Applied Mathematics. After coming to Embry-Riddle, I thought that it would be easy for me like high school, but after a few rough semesters and a 1.6 GPA, I realized I had to reevaluate what it was that I wanted out of ERAU and out of myself. Fast forward to 2021 and I just recently signed a full-time offer with Blue Origin working as a Test Engineer on the BE-3U and BE-4 rocket engines in Van Horn, TX. During my time at ERAU though, I've participated in on campus research, been a member of various clubs, am in a fraternity, and was an RA for most of my college career. Between my Freshman year and my (super) Senior year, there's been a ton of growth, learning, and effort. The number of possibilities that exist after graduation are endless and sometimes thinking about that can be incredibly overwhelming, but good time management, hard work, and a dream can go a long way towards helping shape your goals towards that first job.

Discuss your two internships and the differences at large and smaller companies and your responsibilities.

The first internship I ever had was at a company called Zero-G Horizons Technologies (ZGHT), which is located right here in Daytona Beach. At the time, COVID restrictions were getting harsh and finding an internship was hard, but a graduate friend of mine saw a listing for an intern need and pointed me that way. Later I discovered that the owner of the company was an ERAU professor I had in the past and I was able to reach out and interview with them. When I came in to interview with them, one of the questions that they asked stood out to me in particular: "What do you hope to get out of this internship?" At the time, I think my answer was something about how I wanted to see how the engineering process goes, but in the end, I got so much more out of it. Even though the position was originally open to graduate students only, they decided I was a good fit, so they brought me on.

During my time with ZGHT, I held many different responsibilities and often it changed based on the day and what was needed, but you could usually find me testing electronics, writing Python/MATLAB scripts, doing CAD work to design parts, 3D printing mechanisms, and getting custom parts ordered from different suppliers. Overall, my contributions were towards helping the company develop its first science payload that was set to launch on a Blue Origins New Shephard rocket sometime in 2022. Typically, I was given a task and asked to find a solution with certain requirements and then give a weekly report about the week's goals, how it went, and what next week's goals were. I really loved how I was able to have both a ton of independence and be completely hands on with my work; usually, whatever solution I came up with that met the requirements was the one that was chosen. Having that much independence really allowed for me to be creative and try new things without too many consequences which ultimately is what started my passion for electronics and 3D printing.

My second internship was with General Atomics (GA) in Centennial, CO where I was a Spacecraft Systems Engineering Intern. At the time, I kept an internship tracker, and it was the 296th internship I had applied for between February 2020 and November 2020. The main technical interview was probably the hardest one I've had in my life; they tore apart and quizzed me on every single bullet point in my resume. I was thinking that I for sure bombed the interview since I couldn't go into as much depth as they wanted about some things, but it turns out they want candidates to think on their feet, not perfection. After getting to Colorado, I learned that I'd be supporting the systems engineering team during a Critical Design Review or CDR of their satellite OTB-2 MAIA. I had just taken my first of two senior design classes where the final project was to create a draft CDR for a space mission. For Aerospace Engineering students, CDR is one of the most important milestones in the lifecycle of a satellite, rocket, plane, or program, so I was excited to see how it happens in real life. NASA JPL flew up to Colorado and it was a 6-day long process of nothing but back-to-back PowerPoints for roughly 10 hours a day. After that was done, I was moved onto another satellite, OTB-3 ARGOS-4, where I tested circuit boards, made interfaces for ground equipment in Python, and ran through various systems level tests. Overall, it was a great learning experience and I still intern part time with GA today!

These two companies were each on different size scales completely, with ZGHT having only 6 or so employees, and GA having tens of thousands of employees. I know that many people see a bigger company as just inherently better, but in my opinion that really isn't the case. At Zero-G, I was able to make serious design decisions and was expected to be the subject matter expert for my contributions to the project, often justifying decisions made to suppliers and NASA JSC themselves. This made the experience feel extremely fulfilling as it helped to connect how my contribution mattered in relation to the entire project. At a smaller company, you can have a lot more hands on work and really contribute more to whatever project you're working on. At General Atomics, my role was much smaller in the grand scheme of things, but I had a larger support system of hundreds of engineers who knew the industry and usually had an answer to any of my questions. In addition, at a larger company there can often be more hoops to jump through and less chances to get hands on with projects. Ultimately, choosing a large or small company is a personal choice based on what kind of experience you're looking for as an engineer.

How did your education and previous experience help you obtain your full-time offer at Blue Origin?

Blue Origin has a very long interview process consisting of firstly a 30-minute recruiter interview, a 30-minute hiring manager interview, and so long as the other went well, a 1-hour technical deep dive presentation on one of your projects followed by 6 back-to-back 30-minute interviews with the panel you presented to. During the one-on-ones after your presentation, they ask a ton of technical questions that really test if you were paying attention in class. For example, they asked questions about why certain rocket fuels are better than others, types of sensors to measure data, and even things like how to design and build a rocket engine. The one thing that they all had in common, however, was that they wanted to know about hands on work and not so much theory. I think that going to Embry-Riddle really set me up for success because of how hands-on the Aerospace Engineering degree program gets later down the line. I remember seeing all the cool labs while on a tour of Riddle but had no idea just how much I'd use them as a Junior/Senior. While I was at General Atomics, one of the other interns said that their professor at another very popular engineering school said, "We don't offer that kind of hands-on experience here, if you want that you'll have to go to Embry-Riddle to get it." Just the fact that all Aerospace Engineering students take a class on using wind tunnels for your work (AE 315, Experimental Aerodynamics), blew my friend's mind. During my interview with Blue Origin, I showed the panel a left-over piece of crushed aluminum honeycomb that I had just made in my AE 417 class the week prior, and they were amazed that we got to do that in undergrad. To top it all off, all the hands on testing I had done at ERAU and both internships really helped to show how to make that transition from classwork to real life application.

What will your responsibilities be in your new role?

My role at Blue Origin will primarily be responsible for setting up different rocket engines on their respective test stand and getting them hooked up to all the sensors, piping, and instrumentation required to perform engine tests. They tell me that after 6 months to a year, I should be able to run hot fire tests myself. Even though rocket engines have no moving parts themselves, there's a ton of support equipment that must be set up and tested to ensure there isn't a 'rapid, unscheduled disassembly, a.k.a explosion.

What advice do you have for students who are looking for an internship or full-time opportunity?

I've got four points that I think will help a lot.

1.)  Get your networking up: You'd be surprised just how small the aerospace industry really is and jobs can come from literally just knowing someone.

2.) Don't let rejection become personal: Rejection happens to everyone, even if you're the best student ever.

3.) Everyone has imposter syndrome: Even my last manager (an engineer of 30 years) feels like they don't know what they're doing.